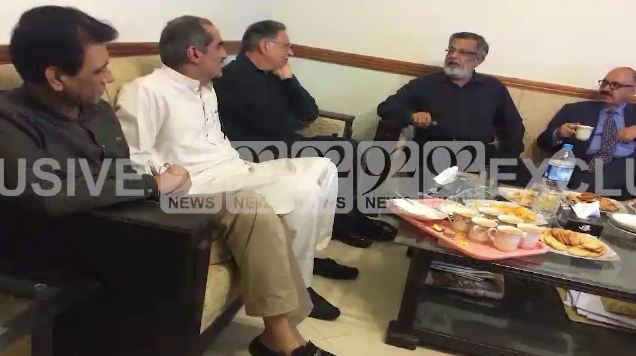 ISLAMABAD (92 News) – Muttahida Qaumi Movement on Thursday has devised a strategy to approach Supreme Court if the de-seating motion of Pakistan Tehreek-e-Insaf members of parliaments failed. A delegation of Pakistan Muslim League-Nawaz federal ministers comprising Pervaiz Rashid, Khawaja Saad Rafiq and Irfan Siddiqui met MQM leaders and tried to convince them to withdraw motion of de-seating the PTI leaders. Sources said that the MQM not only refused to withdraw the motion but also made their future agenda clear of approaching Supreme Court if the motion failed in the parliament. The MQM further requested the government to support their motion of de-seating PTI members of parliaments. On the other hand, the government delegation members told 92 News that they were in contact with the MQM and JUI-F in this regard. Meanwhile, Pakistan Tehreek-e-Insaf has also devised their strategy of walking out of the parliament if voting conducted against them.