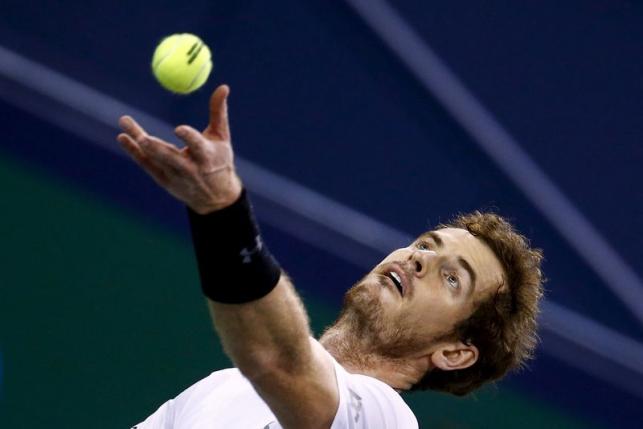 PARIS – Andy Murray put down an early warning for the Davis Cup final when he dismantled David Goffin 6-1 6-0 in awe-inspiring fashion to reach the quarter-finals of the Paris Masters on Thursday. Three weeks before Britain and Belgium face off in the Davis Cup final on clay in Ghent, Murray had just too much pace for the 16th seeded Goffin on the Bercy hard court. Goffin can only hope the red dust will slow down world number three Murray in the Nov.27-29 tie. The second-seeded Murray had Goffin chasing from corner to corner throughout a one-sided contest. An unforced error gave Murray the opening set and the Olympic champion was relentless in the second, closing it out with a backhand winner down the line having allowed Goffin only eight points on his service games. Murray faces either Japanese sixth seed Kei Nishikori or France's Richard Gasquet, the 10th seed, next. The Paris Masters is the last event before the season-ending ATP World Tour finals, played between the eight best players of the season from Nov. 15-22 at the 02 Arena in London. World number one Novak Djokovic, Roger Federer, Murray, Stan Wawrinka, Rafa Nadal, Tomas Berdych, Nishikori, and David Ferrer have all qualified. All of them are in action in Paris on Thursday. –Reuters