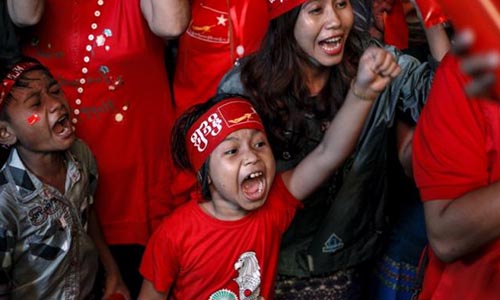 NAYPYITAW/HINTHADA, MYANMAR – Myanmar's ruling party conceded defeat in a general election on Monday as the opposition led by democracy figurehead Aung San Suu Kyi appeared on course for a landslide victory that could ensure it forms the next government. "We lost," Union Solidarity and Development Party (USDP) acting chairman Htay Oo told Reuters a day after the Southeast Asian country's first free nationwide election in a quarter of a century. By late afternoon, vendors outside the headquarters of the National League for Democracy (NLD) in Yangon were selling red T-shirts with Suu Kyi's face and the words "We won". The election commission later began announcing constituency-by-constituency results from Sunday's poll. All of the first 12 parliamentary seats announced were won by Suu Kyi's party. The keenly watched vote was Myanmar's first general election since its long-ruling military ceded power to President Thein Sein's quasi-civilian government in 2011, ushering in a period of reform and opening up to foreign investment. The NLD said its own tally of results posted at polling stations around the country showed it was on track to win more than 70 percent of the seats being contested in parliament, above the two-thirds threshold it needs to form Myanmar's first democratically elected government since the early 1960s. "They must accept the results, even though they don't want to," NLD spokesman Win Htein told Reuters, adding that in the highly populated central region the Nobel peace laureate's party looked set to win more than 90 percent of seats. Reuters was not able to independently verify the party's own estimates of its performance. Earlier, a smiling Suu Kyi appeared on the balcony of the NLD's headquarters and in a brief address urged supporters to be patient and wait for the official results. Traffic squeezed at a walking pace through a fast-gathering crowd outside the NLD office after the first results were announced. They listened to songs and watched a Suu Kyi video on a big screen hung from the building, though many huddled under umbrellas as torrential rain dampened the mood. I'm very happy about the result," said Hnin Si, 60, a trader in Yangon. "The people have suffered for 50 years. I believe Aung San Suu Kyi will make the country a better place." DEMOCRATIC JOURNEY The election was a landmark in the country's unsteady journey to democracy from the military dictatorship that made the former Burma a pariah state for so long. It is also a moment that Suu Kyi will relish after spending years under house arrest following the country's 1990 election, when the NLD won a landslide victory that was ignored by the junta. This time the ruling party, created by the former junta and led by retired military officers, and the chief of the armed forces have pledged to respect the result. But although the election appears to have dealt a decisive defeat to the USDP, a period of uncertainty still looms over the country because it is not clear how Suu Kyi will share power easily with the still-dominant military. The military-drafted constitution guarantees one-quarter of parliament's seats to unelected members of the armed forces and allows the commander-in-chief to nominate the head of three powerful ministries, interior, defence and border security. The charter also gives the armed forces the right to take over government under certain circumstances. The military maintains a grip on the economy through holding companies. Even if the NLD gets the majority it needs, Suu Kyi is barred from taking the presidency herself under the constitution written by the junta to preserve its power. Suu Kyi has said she would be the power behind the new president regardless of a charter she has derided as "very silly". Incomplete vote counts showed some of the most powerful politicians of the USDP trailing in their bids for parliamentary seats. Among the losers was USDP chief Htay Oo, who told Reuters from the rural Irrawaddy delta heartlands that are a bastion of support for his party he was "surprised" by his own defeat. Voting in the historic election was for the most part trouble-free, despite religious tensions fanned by Buddhist nationalists whose actions have intimidated Myanmar's Muslim minority in the run-up to the poll. But the NLD cried foul on Monday over advance votes that could boost the chances of a senior member of the ruling party. In an official complaint, it said it was "illogical" the USDP could win 90 percent of advance votes - made by those unable to vote on election day - in Lashio, a township in the east of the country with a large military presence. Its complaint followed concerns that some observers were not given permission to monitor voting on military installations. The issue over advance votes taps painful memories of a previous election in 2010, which the NLD boycotted and the USDP won by what the Brussels-based think tank International Crisis Group called "massive manipulation" of the count, particularly of advance votes. –Reuters