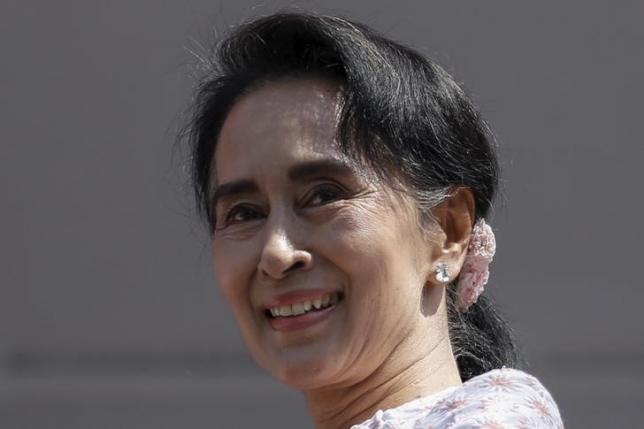 NAYPYITAW - Myanmar's triumphant opposition leader Aung San Suu Kyi held talks with the powerful parliament chairman on Sunday after an election landslide set to usher in a new democratic era and sweep out much of the military old guard. Remaining seats were due to be declared later on Sunday to cement a thumping victory that allows the National League for Democracy (NLD) to form the next government, and turn the political tables after years of disenfranchisement under the military's harsh 1962-2011 rule. On the eve of what could be the last session of the current parliament, lower house chairman Shwe Mann, who lost his seat in the Nov. 8 vote and was ousted in August as head of the ruling party, said Suu Kyi had sought help in the transition period. "She congratulated me for accepting the election result early and comforted me," he said in a Facebook posting, with a photograph of them together, smiling. The reformist ex-general wields much influence over lawmakers and his cooperation in the coming weeks could remove some potential hurdles to the NLD before it takes office. Shwe Mann's warm ties with Suu Kyi and his attempt to block some military from running as Union Solidarity and Development Party (USDP) candidates contributed to his dramatic removal as party leader. Shwe Mann was among hundreds of losing USDP lawmakers in what appears to be an overwhelming public rejection of a party that was set up by the military and was swept to power in a flawed 2010 election boycotted by the NLD. The armed forces commander, Senior General Min Aung Hlaing and President Thein Sein have been unambiguous in their endorsements of the NLD victory. But suspicions still linger among some in Myanmar who in 1990 saw an NLD landslide election win ignored by the junta. It is unclear what kind of relationship the NLD might have with the military, which would retain a quarter of house seats and three crucial ministerial portfolios, according to a constitution it drafted prior to ending its rule in 2011. 'NEW POLITICAL CULTURE' Thein Sein has promised a trouble-free transition and reconciliation talks with Suu Kyi at an undisclosed time. In a speech on Sunday in Yangon, he said his semi-civilian government had built the foundations for a "new political culture" that meant differences could be managed. "Duty will be transferred to the next government systematically, according to the schedule. We will ensure it will be very smooth and stable, without worry," he said. The NLD has so far won more than 80 percent of the votes for the bicameral parliament but that does not guarantee a fairytale ending soon. The military's quarter-quota of legislative seats amounts to a de facto veto on amending a constitution that prevents Suu Kyi from becoming president because of her sons' British citizenship. Suu Kyi has already courted some controversy in her plan to install as president an NLD stooge who she says will have no authority, even though Myanmar's constitution states the president "takes precedence over all other persons". The upcoming legislative session will pass several laws and a new budget, which could create complications for the NLD. It will take office amid high expectations to continue an economic overhaul started by Thein Sein and his technocrats, which has seen record foreign investment, improvements in power, infrastructure and telecoms and booms for tourism, construction and banking. "If you look at the parliament and think who (among the USDP) will be there again in the spring, it's literally a handful," said Sean Turnell, an expert on Myanmar's economy at Sydney's Macquarie University. "There's going to be very little continuity. It's something that the NLD will have to watch. These guys have nothing to lose." -Reuters