Myanmar's Suu Kyi says will be above president in new government 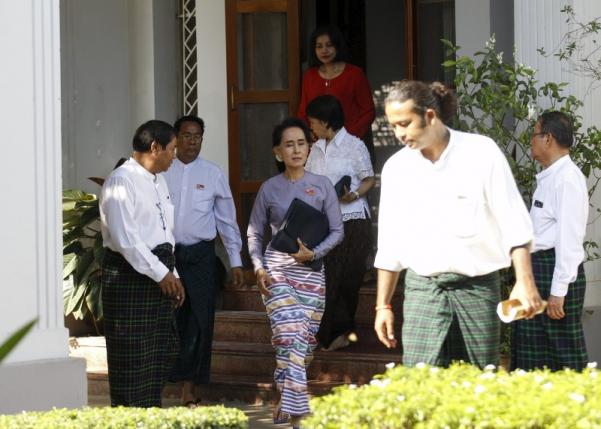 Myanmar's Suu Kyi says will be above president in new government

YANGON – Myanmar opposition leader Aung San Suu Kyi said on Thursday she would be "above the president" if her party wins a historic election on Nov. 8, defying a constitutional ban on becoming president herself. Suu Kyi's remarks could complicate her already fraught relations with Myanmar's military, which drafted the 2008 constitution to preserve its power and effectively exclude her from leading the country. Her National League for Democracy (NLD) party is the frontrunner in the first general election since a semi-civilian government took power in 2011 after nearly 50 years of military dictatorship. "If we win, and the NLD forms a government, I will be above the president. It's a very simple message," a relaxed and smiling Suu Kyi told reporters at her lakeside home in Yangon, Myanmar's largest city. When asked if this arrangement violated the constitution, Suu Kyi replied: "No. The constitution says nothing about somebody being above the president." The constitution however states that the president "takes precedence over all other persons" in Myanmar. Suu Kyi's remarks were rebutted by Zaw Htay, a senior official at the President's Office, who told Reuters that her comments were, "against the constitutional provision." The constitution also reserves a quarter of all parliamentary seats for the military and bars presidential candidates with foreign spouses or children. Suu Kyi had two sons with a late British academic. "While the constitution is far from perfect, and understandably perceived as a flawed document, it still serves as the basis for Myanmar's current political system, including the elections this weekend," said Nyantha Maw Lin, managing director at political consultancy Vriens & Partners in Yangon. Suu Kyi said the NLD had already chosen someone who was prepared to act as president, but would not say who it was. According to speculation in Myanmar's media, likely candidates include the speaker of lower house, an aging NLD party patron and even Suu Kyi's personal physician. Suu Kyi said reports of fraud, intimidation and irregularities in advance voting had marred what many people hope will be Myanmar's first credible election since 1990, which the NLD won by a landslide. The military annulled the result and kept Suu Kyi in detention or under house arrest for most of next 20 years. "TOTALLY ILLEGAL" International election monitors said on Thursday they were still negotiating access to observe advance voting on military installations. "It seems there is not clear rejection but they are also not clearly allowing us," Ichal Supriadi of the Asia Network for Free Elections (ANFREL), told Reuters by phone on Thursday. Myanmar's army forces chief General Min Aung Hlaing had granted European Union (EU) observers access to advance voting in military installations, but the details were still being "hammered out," EU chief observer Alexander Graf Lambsdorff told reporters on Thursday. "We will see exactly how it's going to play out once the details are decided," he said. Suu Kyi said the NLD had collected reports of advanced voting "carried out in a totally illegal way." The long gap between the election on Sunday and the new government taking power next February was also "a cause for concern," she said. In a video at the start of her two-month campaign, she the international community to be vigilant during this transition period, which she said was almost as important as a free and fair election. Analysts have warned of a possible rise in post-election tensions, particularly over the choice of president. The political activity of the radical Buddhist group Ma Ba Tha, which sharply criticized the NLD for opposing laws seen as anti-Muslim, was unconstitutional, Suu Kyi said. Suu Kyu said that the plight of the Rohingya, a persecuted Muslim minority living in the western state of Rakhine, should not be exaggerated when "our whole country is in a dramatic situation." She has been widely criticised for not speaking out enough on the Rohingya, thousands of whom are interned in squalid camps. –Reuters