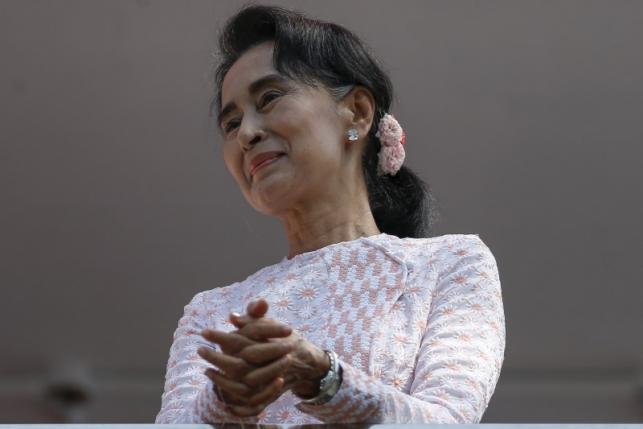 YANGON - Fresh results from Myanmar's election on Tuesday showed the opposition taking control of most regional assemblies as well as forming the next government, handing democracy champion Aung San Suu Kyi sweeping powers and reshaping the political landscape. The ruling party, which was created by the country's former junta and is led by retired military officers, on Monday conceded defeat in an election that was a major milestone on Myanmar's rocky path from dictatorship to democracy. But results dribbled out by the election commission have shown that their Union Solidarity and Development Party (USDP) was not just beaten in the polls, it was trounced. Suu Kyi's National League for Democracy (NLD) said its own tally of results posted at polling stations around the country showed it was on track to take more than two-thirds of seats in the lower house of parliament, enough to form Myanmar's first democratically elected government since the early 1960s. Reuters was not able to independently verify the party's own estimates of its performance. The election commission said the NLD won 49 of the 54 seats declared so far for the 440-strong lower house, where - under the constitution drawn up by the former junta - a quarter of the seats are unelected and reserved for the military. Official results also showed that Sunday's election had handed the NLD a landslide win in the battle for regional assemblies, with Suu Kyi's party winning 97 of the 107 seats declared so far for local legislatures and the USDP just three. "The difference between the parties is huge. It's a clear win," said Sitida, a 37-year-old Buddhist monk in the central city of Mandalay who marched in the country's 2007 "Saffron Revolution" protests that were bloodily crushed by the junta. Sitida, who was sentenced to 70 years in prison for his role in the demonstrations but was given amnesty as part of political reforms in 2011, said the military would now have to accept the NLD's win and negotiate an orderly retreat from politics. "Daw Suu can make this happen. Daw Suu can convince them," he said, referring to Suu Kyi with an honorific. "NOW COMES THE HARD PART" However, while the USDP has been cut down and much of the establishment shaken by the extent of Suu Kyi's victory, the army remains a formidable power. In addition to its guaranteed bloc of parliament's seats, the commander-in-chief nominates the heads of three powerful and big-budget ministries - interior, defence and border security - and the constitution also gives him the right to take over the government under certain circumstances. Although the military has said it will accept the outcome of the election, analysts say a period of uncertainty still looms for the former Burma because it is not clear how Suu Kyi will share power easily with the generals. Sunday's vote was Myanmar's first general election since its long-ruling military ceded power to President Thein Sein's quasi-civilian government in 2011, ushering in a period of reform and opening up to foreign investment. It is also a moment that Suu Kyi will relish after spending years under house arrest following a 1990 election, when her NLD won a landslide victory that was ignored by the junta. Suu Kyi is barred by the constitution from taking the presidency herself, though has said she will be the real power behind the new president, regardless of a charter she has derided as "very silly". Washington on Monday welcomed the election as a victory for Myanmar's people but said it would watch for the democratic process to move forward before making any adjustments to U.S. sanctions on a country long considered a pariah. President Barack Obama has invested significant personal effort in Myanmar, visiting the country twice in the past three years, hoping to make its democratic transition a legacy of his presidency and an element of his strategic "pivot" to Asia. Daniel Russel, the U.S. assistant secretary of state for East Asia, said that after 50 years of military dictatorship, "this was a hell of a step forward for the democratic process in Burma" but added: "Now comes the hard part." For the United States and the international community to provide the kind of support Myanmar needed, Russel said, the transition from the current government to the future administration "is going to have to be credible". -Reuters