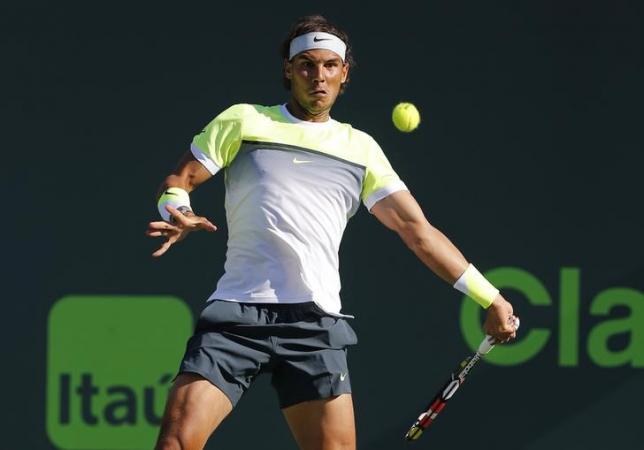 MIAMI – A struggling and edgy Rafa Nadal crashed out of the Miami Open in the third round on Sunday, losing 6-4, 2-6, 6-3 to fellow Spaniard Fernando Verdasco. The 31-year-old Verdasco, who is ranked 34th in the world, has now won his last two matches against world number three Nadal, after the 14-time grand slam winner had won their previous 13 meetings. "It is a huge victory and it is always nice to win in a packed stadium in a big tournament and against one of the best players in history," said Verdasco. Verdasco caused problems from the outset and broke in the eighth game, helped by a double fault from Nadal. Nadal battled back in the second set, breaking Verdasco twice and pushing the contest into a third set. The contest turned decisively in Verdasco's direction when he broke to go 3-1 up in the third set. Nadal has never won in Miami, with his 11 attempts his longest streak of attempts at a tournament without a victory and he said he was concerned that he was nervous when playing. "I am playing with too much nerves for a lot of moments, in important moments, playing a little bit of anxious in those moments," he said. "I have been able to control my emotions during, let's say, 90-95 percent of the matches in my career, today it was tougher to be under self control. "But I am going to fix it. I don't know if in one week, in six months, or in one year, but I am going to do it." In another upset, seventh seed Stan Wawrinka lost 7-6(4), 7-6(5) to 28th-seed Adrian Mannarino. Britain's Andy Murray moved into the last 16 after beating Colombia's Santiago Giraldo 6-3 6-4 to clinch his 499th win on the ATP Tour. Murray would become just the ninth active player and only the 46th man in the Open era to achieve the 500-win milestone should he defeat South African Kevin Anderson in the next round at Key Biscayne. Murray's latest win, in bright sunshine, was a relatively straightforward matter although Giraldo's free swinging approach in the second set brought the contest alive as he battled back from 5-1 down before Murray wrapped up the win in 84 minutes. Czech Tomas Berdych saved four match points as he beat Australia's Bernard Tomic 6-7(4) 7-6(3) 6-1. –Reuters