ISLAMABAD (92 News) – The Supreme Court (SC) on Wednesday ordered to arrest Former Malir Senior Superintendent of Police (SSP) Rao Anwar from the courtroom after the ex-cop appeared in the Supreme Court.

Anwar was wanted in the extra-judicial killing case of a 27-year-old Nabeebullah Mehsud, hailing from Waziristan.

In January, the former SSP was suspended from his post after an inquiry committee formed to probe into Naqeebullah Mehsud’s extra-judicial killing recommended removing Rao Anwar after no evidence pertaining to Naqeeb’s involvement in terrorism was found and the encounter was termed as ‘suspicious’.

As the hearing started after a brief interval, the court ordered the police to arrest ex-cop Rao Anwar after which the law enforcers detained him from the courtroom.

The court also ordered to restore all the accounts of Anwar, while the court rejected his plea for protective bail.

The CJP also formed a five-member joint investigation team (JIT) to probe the case, while the counsel of former SSP appealed the court to include ISI and IB in the JIT.

The court also rejected his request for inclusion of representatives of ISI and IB in the joint investigation team probing Naqeebullah murder case. The bench pointed out that ISI and IB have nothing to do with a murder case.

At the last hearing, the CJP had warned that anyone found facilitating the former Malir SSP Rao Anwaar, wanted in the Naqeebullah Mehsud killing case, will be strictly dealt with.

The court had also summoned the relevant officials over issuance of an overseas flight boarding pass to Rao Anwar. The court also asked the Sindh Police inspector general for an in-camera briefing. 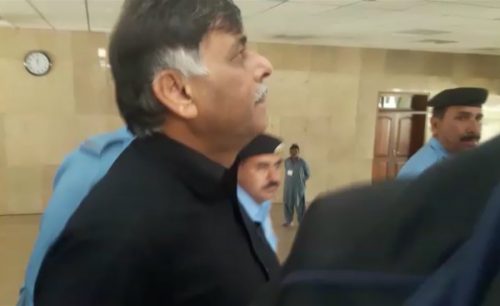