The day marks adoption of historic Lahore Resolution in 1940 that provided a framework for realization of the goal of a separate homeland for Muslims of South Asia.

Special prayers were offered in mosques after Fajr prayers for the progress, prosperity and solidarity of the country.

Today is a public holiday. National flag is being hoisted on major government buildings.

Main feature of the day is the military parade at Parade Avenue in Islamabad where armed forces are conducting march past and fighter jets will present aerobatic maneuvers.

Floats depicting the culture of different regions will also be displayed on the occasion. 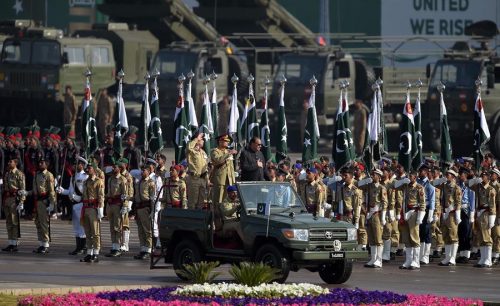 Sri Lankan President Maithripala Sirisena was the guest of honour at the event.

A splendid fly past of JF-17 Thunder and F-16 fighter jets was conducted. The Pakistan Air Force saluted President Mamnoon.