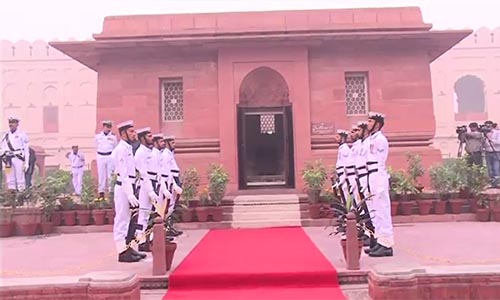 LAHORE (92 News) – The 138th birth anniversary of national poet Dr Allama Muhammad Iqbal was celebrated across the country on Monday. The change of guard ceremony was held at the mausoleum of Allama Iqbal in Lahore. A smartly-turned Pakistan Navy's contingent took over the charge from the Punjab Rangers. Punjab Governor Malik Muhammad Rafique Rajwana visited the Mazar-e-Iqbal and laid a floral wreath on his grave. To mark the day, several programs were organized by various educational, governmental and non-governmental organizations to highlight Iqbal’s services as a scholar, intellectual and a poet who motivated the Muslims through his poetry and advocated for the unity of Muslim Ummah.