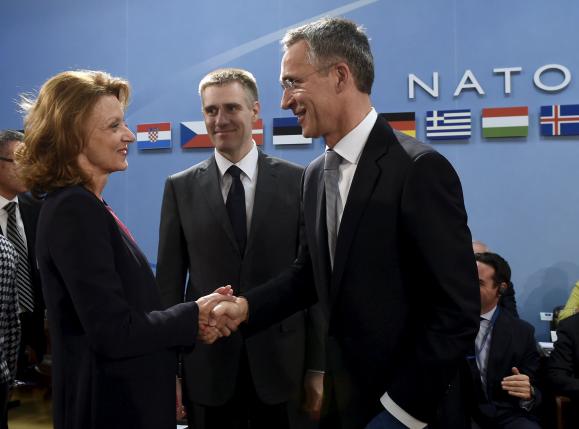 BRUSSELS - NATO foreign ministers invited tiny Montenegro on Wednesday to join their military alliance in its first expansion since 2009, defying Russian warnings that enlargement of the US-led bloc further into the Balkans would be a provocation.

In a scripted session at NATO's headquarters in Brussels, Montenegro's Foreign Minister Igor Luksic strode into the imposing conference hall to loud applause from his peers as NATO chief Jens Stoltenberg declared: "This is the beginning of a very beautiful alliance."

Stoltenberg said inviting Montenegro had nothing to do with Russia. But NATO diplomats have said the decision sends a message to Moscow that it does not have a veto on NATO's eastwards expansion, even if Georgia's membership bid has been complicated by its 2008 war with Russia.

Moscow opposes any NATO extension to former communist areas of eastern and southeastern Europe, part of an east-west struggle for influence over former Soviet satellites that is at the centre of the crisis in Ukraine.

Russian Foreign Minister Sergei Lavrov said last September that any expansion of NATO was "a mistake, even a provocation". In comments to Russian media then, he described NATO's so-called open door policy as "irresponsible".

RIA news agency cited a Russian senator as saying on Wednesday that Russia will end joint projects with Montenegro if the ex-Communist country joins the North Atlantic Treaty Organisation. The Adriatic state of 650,000 people is expected to become a member formally next year.

Viktor Ozerov, head of the Russian Federation Council's defence and safety committee, said the projects which could be axed included those in military areas, RIA reported.

NATO foreign ministers broke off formal contact with Russia in April last year after Moscow annexed Ukraine's Crimea peninsula and sparked the conflict in eastern Ukraine that has killed more than 8,000 people.

Still, NATO allies are divided over what message to send to Georgia over its long-delayed membership bid, with some European capitals arguing the alliance would be unable to defend the ex-Soviet state in the event of a conflict with Russia.

Those difficulties were underlined by a foreign ministers' joint statement that provided little momentum in Georgia's membership talks.

While Stoltenberg said the door remains open for Tiblisi, ministers reiterated their long-held position that Tiblisi must continue to prepare for membership one day, calling for Russia's military to withdraw from Georgia's separatist regions of South Ossetia and Abkhazia.

Russia's presence there and the agreements signed between Russia and the two regions "blatantly contradict the principles of international law," ministers said.

But Russia's build-up of surface-to-air missile batteries and anti-ship missiles in Crimea and the Black Sea make Georgia more difficult to defend from the Mediterranean or NATO-member Turkey, meaning any action might have to involve a deployment of ground troops from Western Europe.

NATO membership is also dependent on a country settling any outstanding territorial disputes, a big hurdle for Georgia.

After Albania and Croatia joined NATO in 2009, only Serbia, Russia's closest ally in the Balkans, is not actively pursuing membership of the alliance. Foreign ministers signalled support for Macedonia and Bosnia and Herzegovina, but neither are expected to join soon.

Sixteen years after NATO bombed Montenegro during the Kosovo war, Montenegro has now been invited to join NATO but it can take up to 18 months for a country to formally join. Stoltenberg said he expected accession talks to go quickly. That suggests Montenegro may formally become a member at the next summit of NATO leaders in July in Warsaw. -Reuters