The purpose of the three day symposium is to provide a forum for senior international naval leaders to discuss common maritime challenges and opportunities to enhance international maritime security cooperation.

On the occasion, the Naval Chief also met with US officials and his Turkish and Brazilian counterparts. They discussed bilateral cooperation and security in the Indian Ocean. 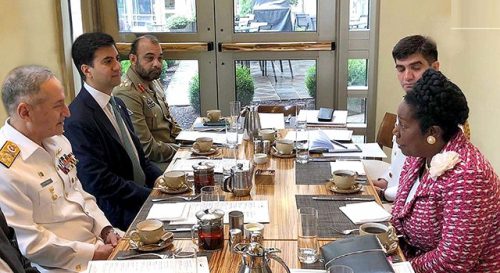 Earlier, Admiral Zafar Mahmood Abbasi, who is on an official visit to the United States met various dignitaries there.

During the meetings, matters of mutual interest including bilateral defence ties and security environment in Indian Ocean Region were discussed. The US dignitaries appreciated the role and contribution of Pakistan for maintaining peace and stability in the maritime domain.

The Naval Chief highlighted that Pakistan and US shared common perspective of having stable, secure and peaceful maritime environment to support global economy.