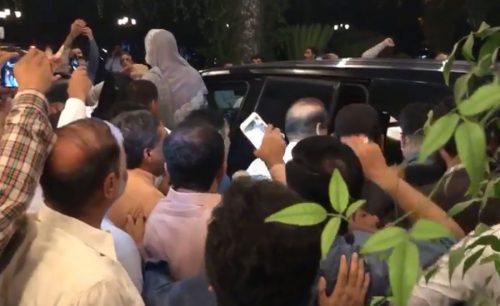 The former premier left for jail from his residence at 8:50pm. Nawaz Sharif was accompanied by his daughter Maryam Nawaz Sharif. A large number of PML-N workers and leaders were also present on this occasion.

Nawaz’s daughter Maryam and nephew Hamza Shehbaz, along with Mohammad Zubair, Talal Chaudhry and other party leaders, have been accompanying the former prime minister.

Maryam Nawaz and Hamza Shehbaz also leading the solidarity rally of party workers from their residence in Jati Umra to the jail.

Have not been able to get out of the house yet. pic.twitter.com/nMGp5l1HRA

Hundreds of PML-N workers turned up on the occasion to express solidarity with the party supremo and showered his vehicle with rose petals.

Maryam tweeted several videos of Nawaz’s loyalists, who gathered to express their support for their leader, and said the passion of party workers was unbelievable.

Still at the gate. pic.twitter.com/kVaByH06va

Mian sb I LOVE YOU ….. pic.twitter.com/NOIiDsakXu

No dear, team is working relentlessly. Some of the videos I have tweeted have been sent to me by our team members but I have the privilege of being in MNS’s car & I feel it is also my duty as PML-N worker to keep MNS & his lovers directly connected. https://t.co/v2sM39aL4Z

Earlier, the jail officials reached Jati Umra to escort the former prime minister to the prison. The Home Department Punjab earlier instructed Nawaz to reach Kot Lakhpat Jail by 5pm today, and said his arrival in the form of a rally would be against the law.

Protesting against the instructions, PML-N leader Rana Sanaullah said that Nawaz’s bail is valid till the midnight of May 7, and questioned why the party quaid should have to reach the jail anytime before that. The party has not issued any call for protest, Sanaullah clarified in the show.

PML-N’s Ahsan Iqbal said that anyone who wished to join the rally would be doing so out of their own will.

The prisoner No 4470 will be allotted B Class. As per directions of doctors, Nawaz Sharif will take meal from his house.

In a tweet, Maryam Nawaz said: “As the decision of going to jail for a father while holding the hand of his daughter was difficult, it is difficult as well for a daughter to take his beloved father to jail.”

On May 3, the Supreme Court (SC) had rejected former prime minister Nawaz Sharif’s review petition seeking extension in the bail.

During the hearing, Sharif’s consul Khawaja Haris said his client can’t apply for bail before surrendering himself to the authorities. To reply, Justice Sajjad Ali said that whatever said prior to signing the order was just an observation.

The lawyer asked the court to extend the bail for eight more weeks as the only option available for his client is to be checked by the same doctors who were treating him earlier in London. The chief justice remarked that Nawaz’s health has deteriorated after going on bail.