On their arrival at Jati Umra, they were accorded a rousing welcome by their relatives and a large number of PML-N workers. 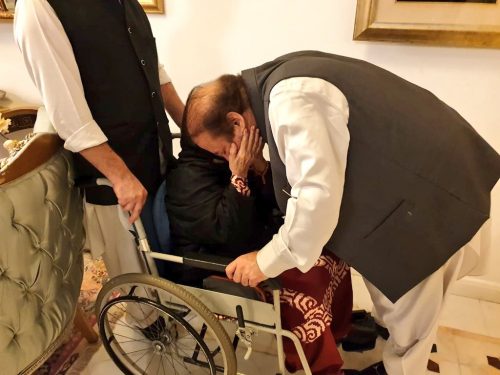 Nawaz Sharif met his mother soon after reaching home  and took meal with her.

Nawaz Sharif, Maryam Nawaz and Capt (retd) Safdar were brought to Lahore from Islamabad by a special plane. After their release, they were taken to the airport by a convoy.

Earlier after the court verdict, PML-N leaders Asif Kirmani, Ch Tanvir and Tariq Fazal Ch submitted the surety bonds worth Rs 500,000 each and handed over the ‘Robkar’, the release order, to the jail authorities.

All three were taken to Nur Khan Airbase from where they boarded a special plane for Lahore. Stringent security arrangements had been made on the occasion.