ISLAMABAD (92 News) – Pakistan Tehreek-e-Insaf (PTI) chairman Imran Khan has said that according to Nawaz Sharif’s notion of democracy, the elected prime minister is above the law of the land and can abuse all institutions, storm [the] Supreme Court, give judges briefcases full of money — with no questions asked and no law applied.

In a series of tweets on Monday, Imran Khan hits back after former prime minister criticized the Khyber Pakhtunkhwa government during public gathering in Peshawar, saying that yesterday Nawaz Sharif made clear his idea of democracy and of a PM heading a democratic government was where the PM is above the law of the land after being elected. He can money launder, evade taxes, conceal assets, lie before parliament – all corruption is permissible because PM is elected.

The PTI chairman went on to say that “Nawaz as usual also held forth with a litany of lies about KP govt, adding that the fact is there are 350 micro hydel stations completed in KP – all he had to do was to send his paid hacks to check this out! As for police, health and education reforms – all Sharif had to do was to talk to KP people.”

He said: “as for the Billion Tree Tsunami someone needs to remove Nawaz’s ignorance on this and inform him WWF has audited the program; Bonn Challenge has commended KP government on it; IUCN has acknowledged its success. Such ignorance on part of the ex-PM is shameful.” 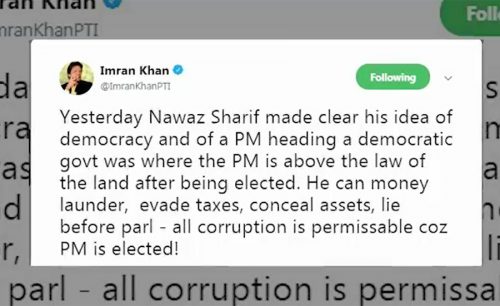