According to the NAB, Nawaz’s low platelet count could be because of the blood thinners, prescribed to him by his physician Dr Adnan Khan. NAB further said that a team of doctors have been deputed to provide him round the clock medical facilities without fail. 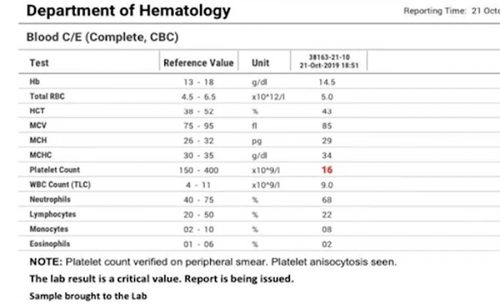 The accountability watchdog body said the former premier had been shifted to Services Hospital for a complete medical check and in order to increase his platelet levels. It added that Sharif’s doctor had spent three hours with the former PM on Monday.

“Therefore, the impression being given in media that NAB has not given him permission to see Nawaz Sharif is not correct and totally baseless. Media is requested to kindly avoid spreading speculations without consulting NAB’s spokesman,” the NAB clarified.

Earlier, Nawaz Sharif, who is currently in the custody of the National Accountability Bureau (NAB), was shifted to Services Hospital for medical check-up after his condition against deteriorated on Monday night.

After the news, several PML-N workers reached outside the NAB office and blocked the road by burning tyres. They chanted slogans against the government and demanded immediately shifting of Nawaz Sharif to hospital.

Addressing the workers, Shehbaz Sharif said that they will hold Imran Khan responsible if anything happened to Nawaz Sharif. “The narrow-minded rulers are doing lawlessness,” he said.

Dr Adnan, Sharif’s personal physician, has expressed concern over the condition of Nawaz Sharif. He said that Nawaz Sharif’s platelets had reduced to alarming level.