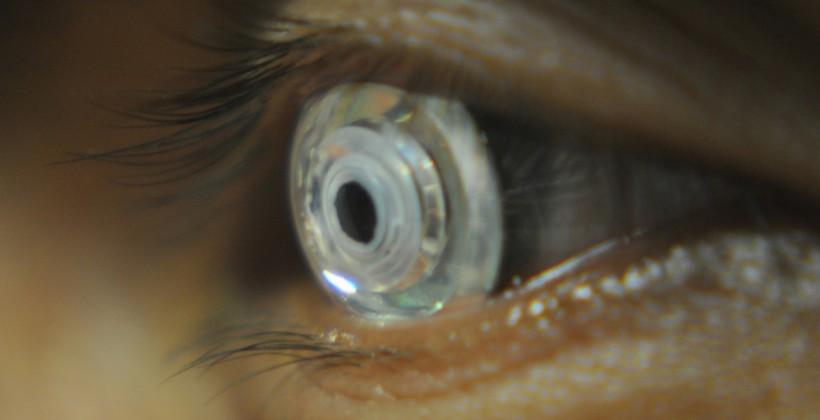 LAUSANNE (Web Desk): Contact lenses with a built-in zoom may change the future of vision. An international team of researchers developed contact lenses zooming capablities and presented the futuristic device at the American Association for the Advancement of Science's (AAAS) annual meeting in California on Friday. The first lens prototype was unveiled in 2013, but it has been significantly improved since then, and now comes with smart glasses. The 1.55-millimeter-thick contact lens contains a tiny reflective telescope, which is activated by a single wink of the eye. It looks like something out of a sci-fi movie or futuristic James Bond sequel. When light hits the lens, small mirrors bounce light around and change how the user perceives the size of objects, magnifying the entire view. The researchers compared it to looking through low-level magnification binoculars. The lenses only work with smart glasses that respond to the wearer’s winks — the right eye to turn on the zoom and the left eye to deactivate it, bringing it back to a normal visual level. The glasses send images to the retina through hundreds of nerves, which convert light into electric impulses. The moment the signals are converted and transmitted to the brain, the user is able to “see.” The Future Of Vision "We think these lenses hold a lot of promise for low vision and age-related macular degeneration,"said the team’s presenter Eric Tremblay, from the Ecole Polytechnique Federale de Lausanne in Switzerland, in a press release. "At this point this is still research, but we are hopeful it will eventually become a real option for people with AMD." Age-related macular degeneration (AMD), a vision disorder that affects older people, is the leading cause of vision loss for people aged 50 and older, according to the National Eye Institute. As people age, some experience damage to the macula, which is the tiny spot in the back of the eye responsible for seeing fine detail and color. AMD doesn’t lead to complete blindness, but it does severely impair a person’s ability to see, eventually interfering with facial recognition, driving, reading, writing, cooking, and other tasks. The new device, which researchers called “a huge leap forward” has the power to magnify objects up to 2.8 times. The Pentagon funded the research, but not with elderly peoples' eyesight in mind. They were originally designed to serve as a form of bionic vision for soldiers, but have since become a revolutionary treatment solution for a rapidly growing older population. Because it was first designed with the intent of helping American soldiers, the cost of the zoom-in lens for the average person will need to be considerably lowered in order to make it not only wearable but also affordable. "It's very important and hard to strike a balance between function and the social costs of wearing any kind of bulky visual device," Tremblay said. "There is a strong need for something more integrated, and a contact lens is an attractive direction." The idea of zoom-in lenses isn’t unique to this research team’s efforts, however older models required users to tilt their heads or position their eyes to activate the magnification. Other visual aid inventions that were presented at the AAAS conference were said to have the potential to help 285 million people with vision impairments throughout the world. The team's goal is to begin clinical trials by 2016 in collaboration with Paris-based Pixium Vision. "Our chips are already working well in animals," said researcher Daniel Palanker of Stanford University in California. The team has already been able to restore vision in blind rats about halfway, which is good progress considering "there is currently no solution for patients with macular degeneration.”