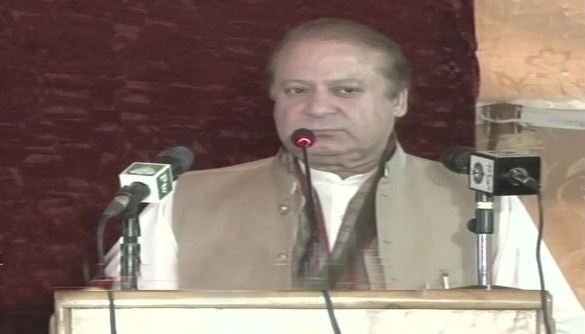 GILGIT (92 News) – Prime Minister Nawaz Sharif has on Tuesday said that nothing was done in the past for the prosperity of Gilgit-Baltistan but now development in the far flung areas is the top priority of the government to bring them at par with the rest of the country. Addressing the cheque distribution ceremony for earthquake affectees in Gilgit today, the prime minister announced to construct Gilgit-Skardu Express at a cost of Rs 50 billion. He said that the express way will be connected with China-Pakistan Economic Corridor for generation of economic activities in the area, adding that an airport in Gilgit would also be constructed for jet service. Nawaz Sharif said that the federal government is spending billions of rupees in the areas for better communication facilities and other welfare oriented development projects. He said that the efforts are being made to strengthen democracy in Gilgit-Baltistan and a committee is working to work out political reforms in the area. “Various steps are being taken to attract tourists towards Gilgit-Baltistan,” he said. The Prime Minister said that work on various power projects including Bhasha Dam is in progress to tackle energy crisis. He directed for early payment of compensation money to the earthquake affected people.