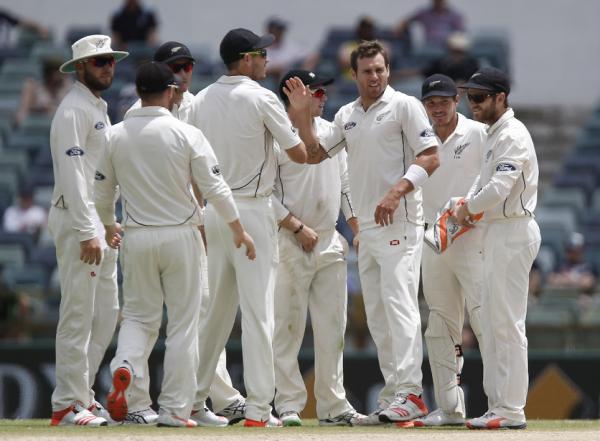 PERTH - New Zealand made a solid if unspectacular start to their pursuit of 321 runs for victory after Australia had declared on 385 for seven by reaching tea on 28 without loss on the final day of the second test on Tuesday. Openers Martin Guptill, who had made 13 not out, and Tom Latham, who was unbeaten on 15, will resume after the break, which was taken early because of a rain shower, with just under 40 overs remaining to secure the win, or stave off defeat. Mitchell Johnson, who announced before the start of play that Tuesday would be his last day as an international cricketer, scored 29 off 45 balls before becoming one of five Australian batsmen to be dismissed on the final day. New Zealand's first innings 624 had given them a 65-run lead over Australia's 559-9 declared. The hosts have declared all four of their innings over the first two tests. Australia won the first match by 208 runs in Brisbane last week and the series concludes at the Adelaide Oval, where the world's first day-night test begins on Nov. 27. Steve Smith (138), Mitchell Marsh (1) and Adam Voges (119) all fell in an opening session, where a bit of swing meant ball had the edge over bat for the first time in a run-fest of a match. Johnson, who was welcomed by a guard of honour of applauding New Zealanders, was the first of the two batsmen to depart caught behind off Tim Southee (4-97) after lunch with Peter Nevill (35) following him back to the dressing room. Skipper Smith had obviously decided 320 would be a big enough target to defend and his loud whistle called Mitchell Starc (28 not out) and Josh Hazlewood (2 not out) in to get ready to take the new ball an hour before tea. Johnson led the Australians back onto the pitch on his 73rd and final test and had bowled an over and two balls without conceding a run before rain forced an early break.   SCOREBOARD