The powerful left-hander punished the touring side with an unbeaten 82 from 42 balls to power New Zealand to 196 for five wickets in their 20 overs after Pakistan won the toss in Wellington and opted to field.

Pakistan were left to rue their decision as Martin Guptill and captain Kane Williamson gave New Zealand a rollicking start with an opening stand of 57 runs.

Anderson smashed six boundaries and four sixes in his knock and added 80 for the fourth wicket with fellow all-rounder Grant Elliott (19) to take his side to a daunting total.

Pakistan never managed to get their chase on track and were reduced to 15-3 within the third over and finally folded for 101 in the 17th.

Wicketkeeper Sarfraz Ahmed (41) showed some resistance but other than Shoaib Malik, who made 14, none of Pakistan’s batsmen notched double figures.

Fast bowler Adam Milne and Elliott picked up three wickets each while Anderson also pitched in with two before he left the field due to cramps.

The two sides will next play a three one-day international series with the first match at the Basin Reserve in Wellington on Monday. –Reuters 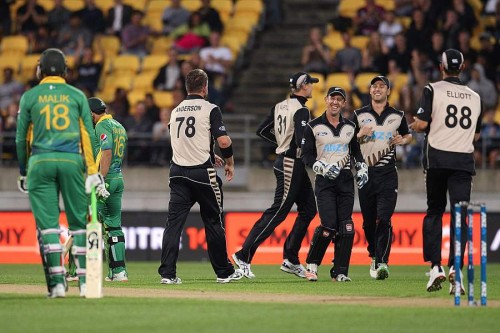