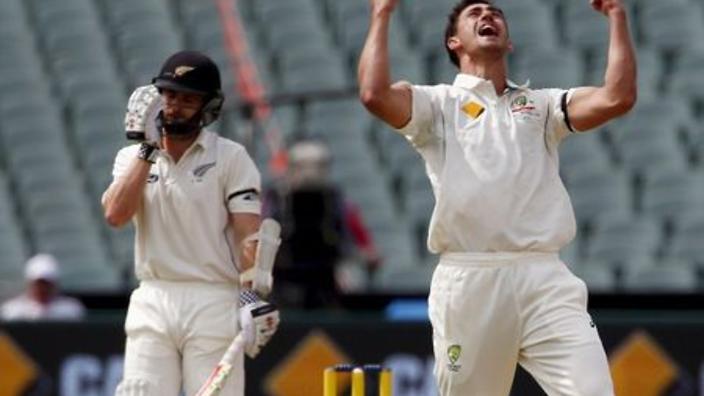 ADELAIDE - Mitchell Starc struck twice as New Zealand crumbled to 173-7 at the dinner-break of the first day-night test on Friday but Australia's joy was tempered when their pace spearhead limped off the ground late in the session. Starc has carried an ankle injury for months and appeared troubled from his first delivery of the pink ball on day one at Adelaide Oval. Soon after bowling debutant all-rounder Mitchell Santner for his third wicket, Starc trudged off the ground gingerly with New Zealand at 142-6. Wicketkeeper BJ Watling was on 24 and Doug Bracewell on five, the tourists having given up five wickets in a session plagued by poor shot selection. Resuming on 80-2, New Zealand lost their first three wickets of the session for just four runs, with opener Tom Latham, Ross Taylor and captain Brendon McCullum all falling through loose shots. Nathan Lyon triggered the rout when Latham bottom-edged to Peter Nevill to be out for 50, the wicketkeeper snaffling a fine catch with the edge of his glove. Taylor, New Zealand's saviour with a glorious 290 in the drawn match in Perth, holed out for 21 with an unsightly drive off Peter Siddle that sent an inside edge through to Nevill. Skipper McCullum showed no interest in digging in for a patient captain's knock and was caught behind for four slashing wildly at a Starc delivery. Spin-bowling all-rounder Santner tried to salvage the innings with Watling and showed some resilience, slicing Lyon to the boundary twice in an over before the drinks break. Starc returned to end the rally, bowling Santner for 31 before exiting the field with figures of 3-24. Lyon added to New Zealand's pain by bowling spinner Mark Craig for 11, with a ball that turned sharply. Starc had earlier captured the prized wicket of Kane Williamson for 22 late in the first session with a trademark searing yorker after a run of 15 dot-balls built the pressure on the classy young batsman. Josh Hazlewood was the first bowler to take a wicket in the historic match at Adelaide Oval, trapping opener Martin Guptill lbw for one run in his second over. Latham became the first to register a half-century just before the tea-break at the end of the first session. McCullum won the toss, ending a poor run of luck with the coin, but New Zealand duly squandered the advantage in front of a crowd of more than 44,000. Australia, who lead the series 1-0, have already retained the Trans-Tasman trophy following the draw in Perth, but New Zealand have a proud record to defend, having not been defeated in seven test series since 2013 under McCullum.   SCOREBOARD