KARACHI (92 News) – The result of medical tests showed that no alcohol was detected in the blood sample of Pakistan Peoples’ Party leader and former minister Sharjeel Memon.

92 News acquired the medical report conducted by the Agha Khan Hospital. According to the test’s report, the blood samples did not contain traces of plasma alcohol and ethanol. It was also reported that three other test reports were also found out to be normal.

On another report, Chief Chemical Examiner Dr Zahid Ansari said that that the bottles recovered from Memon’s room did not contain alcohol. He said that bottles were filled with honey and cooking oil. 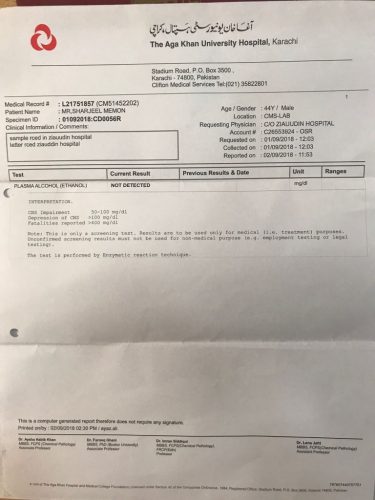 On the other hand, criticizing the former minister, PTI leader Haleem Adil Sheikh said that if raid was conducted on the night, it likely to be found the honey bee. During appearance for hearing in corruption, to a questions about Sharjeel memon, Dr Asim said that the hospital is not like a jail that everything should be checked.

Earlier on Saturday, the chief justice made a surprise visit to Memon’s room at Ziauddin Hospital and found bottles allegedly containing alcohol. An investigation team was formed to launch a probe into recover of liquor bottles.

Memon was shifted to Central Prison Karachi after the top judge’s raid. The CJP, while responding to a question about his visit, said that he went ‘to a sub-jail not a hospital’. The blood samples of Sharjeel Memon were taken on September-1 on orders of Chief Justice of Pakistan (CJP) Justice Saqib Nisar.

Memon’s blood samples were taken on the directions of Chief Justice Mian Saqib Nisar and sent to two hospitals to determine whether Memon was drunk or not after two bottles of alleged liquor were found in his room during treatment. The Sindh government will send the report to the SC.