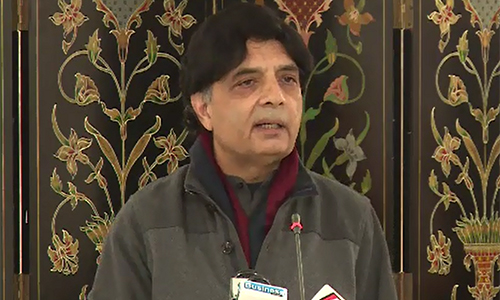 ISLAMABAD (92 News) – Interior Minister Ch Nisar has said that no earthquake is imminent because the civil-military relations are better. Addressing a press conference on Friday, he said that the COAS visit was arranged after approval and consultation of Prime Minister Nawaz Sharif. “The relations between the army and the government are not divided. Enemies benefit from the news about estranged relations between them,” he maintained. He clarified that the COAS visit was scheduled. The minister warned that the airline bringing exiled Pakistanis from abroad without clearance from the FIA would be fined. About human smuggling, he said that the FIA had already launched a crackdown against human smugglers. “A European Union delegation will meet us with regard to human smuggling.” Ch Nisar also informed about the ECL policy and renewal of weapon licenses. He said that the issue of NACTA funds had been resolved. “Reservations of overseas promoters will be removed,” he added. The minister said that Jamatud Dawa had been included only in the watch list.