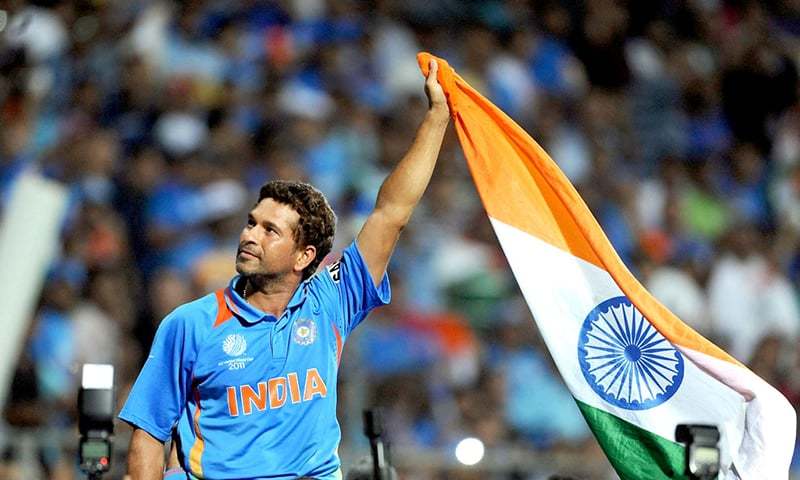 NEW DELHI: India go into the World Cup without the reassuring presence of retired batting superstar Sachin Tendulkar for the first time since 1992, which surely must bring relief to arch-rivals Pakistan. Pakistan have lost all their five World Cup meetings against India and Tendulkar, who featured in all of them, proved a stumbling block on at least four occasions. India and Pakistan face each other in a high-voltage clash at the Adelaide Oval on February 15 to kickstart their campaigns in the 2015 edition of cricket's showpiece event. Tendulkar, who retired in 2013 as the world's leading run-getter in both Test and one-day cricket, added colour to the World Cup, both literally and metaphorically. Coloured clothing was introduced to the World Cup when Tendulkar made his tournament debut in Australia and New Zealand in 1992 after the first four editions were played in whites. Over the next six editions, the prolific Mumbaikar scored more runs (2,278) and centuries (six) than any other batsman in the tournament, ending his World Cup career with a creditable average of 56.95. Tendulkar often spoke of his dream of winning the World Cup for India, saying he was inspired as a 10-year-old by the country's triumph in the 1983 editon when Kapil Dev's men stunned favourites West Indies at Lord's. He saw action from close quarters as a ball boy at Mumbai's Wankhede stadium when India co-hosted the World Cup with Pakistan in 1987, two years before he burst on the world scene as a 16-year-old. Tendulkar was the tournament's leading scorer when India made the semi-finals in 1996 and the final in 2003 before he realised his dream when Mahendra Singh Dhoni's side won back the title on a memorable night in Mumbai on April 2, 2011. The 41-year-old, whose six World Cups is a record matched only by Javed Miandad of Pakistan, has been appointed as the brand ambassador for the upcoming tournament by the International Cricket Council. Tendulkar appeared to reserve his best at the World Cup for the high-profile matches against Pakistan, contests that were followed passionately by millions of fans on both sides of the border. In his first tournament in 1992, Tendulkar top-scored with an unbeaten 54 in India's 43-run win in Sydney. But Pakistan survived the morale-sapping defeat to win the title even as India crashed out in the first round. He made 31 in the 1996 quarter-final in Bangalore which India won by 39 runs and 45 in a second round match at Old Trafford four years later that helped fashion a 47-run victory. Tendulkar's spectacular assault on Pakistani tearaway Shoaib Akhtar on way to a glorious 98 off 75 balls at Centurion in 2003 is part of World Cup folklore that enabled India to chase down a challenging 273-7 with six wickets to spare. “That innings must rank as one of the best I have played because of the immense pressure it was played under,” Tendulkar wrote in his recent autobiography ‘Playing It My Way’. “The ground was buzzing hours before the match. It was sport at its best. This is why I played cricket, to be out in the middle for my team, on the world's biggest cricketing stage, against India's arch-rival.” In the 2011 semi-final in Mohali, Tendulkar hit a streaky, but match-winning 85, after being dropped four times by Pakistani fielders and let off twice by the umpires' review system. Tendulkar's knock turned out to be the top score in the match which India won by 29 runs in front of a sell-out crowd that included the prime ministers of both nations.