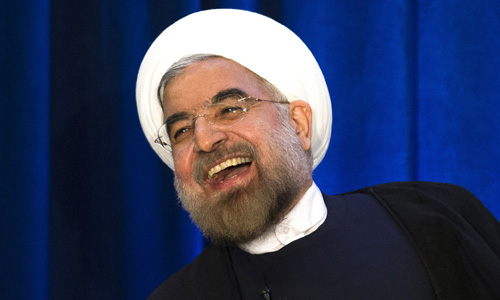 DUBAI – Iranian President Hassan Rouhani said on Saturday recent progress in the nuclear negotiations between Tehran and world powers could lead to a final agreement and all remaining issues could be overcome, state media reported. Iran and six world powers - the United States, Britain, France, Germany, Russia and China - have spent the past week in Switzerland trying to reach an agreement on Tehran's disputed nuclear programme. Negotiators are due to reconvene next week to try to break the deadlock. "In this round of talks, shared points of view emerged in some of the areas where there had been a difference of opinion, which can be a foundation for a final agreement," Rouhani was quoted as saying by state news agency IRNA. "I believe it is possible to reach an agreement and there is nothing that cannot be resolved," he said after visiting a rehabilitation centre for wounded military veterans. Western and Iranian officials have said that the sides are very far apart, though all delegations want a deal. Iran wants all sanctions to be lifted immediately, but a European negotiator described such a step as "out of the question". The sides also disagree on the length of a proposed halt to Iran's nuclear work, with France pushing for a lengthy moratorium. –Reuters