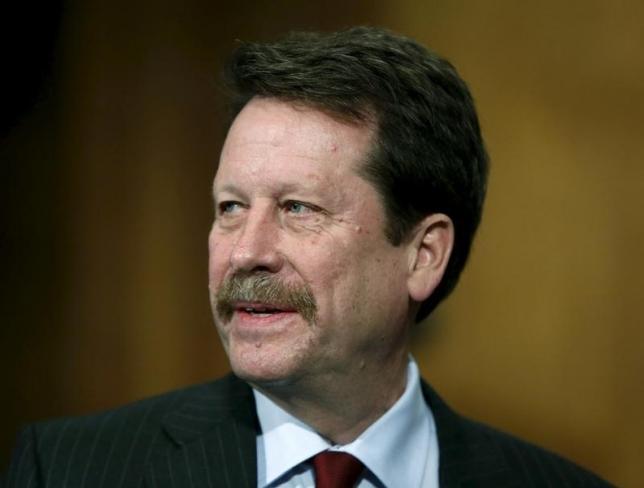 NEW YORK - President Barack Obama's nominee to head the US Food and Drug Administration defended his ties to the pharmaceutical industry on Tuesday during a Senate committee hearing that included questions on soaring drug prices. Presidential candidate Bernie Sanders was among the Democrats who grilled Dr. Robert Califf, 64, who joined the FDA in January as a deputy commissioner. If confirmed, Califf would oversee an agency whose regulatory reach covers 20 cents of every dollar spent by US consumers and includes food, drugs, tobacco, dietary supplements and cosmetics. Califf previously held senior positions at Duke University, where he founded a large academic clinical research center that received more than half of its funding from the drug industry. Over the years, Califf has led multiple large-scale company-funded clinical trials and published more than 1,200 papers. Responding to questions from Senator Elizabeth Warren of Massachusetts, a Democrat, Califf told the committee that the clinical trials he conducted at Duke, if funded by a drug company, had "ironclad" contracts giving the investigators the final rights to publication. Sanders, a Democratic senator from Vermont, said that the FDA needs a candidate who can stand up to an industry that has been "ripping off" the American people by charging "outrageous" prices for medicines. "I have to say to you with regret that you are not that person," Sanders told the nominee during the hearing called by the Senate Health, Education, Labor & Pensions committee. Sanders and other critics say Califf's financial ties to the industry will prevent him from impartially regulating it. Politicians are scrutinizing the cost of prescription drugs following revelations of extreme price increases for some old or mediocre drugs charged by privately held Turing Pharmaceuticals, Valeant Pharmaceuticals International and others. "While all of us agree that clearly we want great new products out on the market to save lives, for millions of people it doesn't matter what the products are, they just cannot afford them," Sanders said. The committee will vote on whether to approve the nomination, which must eventually be approved by the full Senate. Patient groups and medical associations expect Califf to help speed new drugs to market and have publicly backed him, making his confirmation widely expected. The FDA faces pressure from lawmakers and patient groups to make it easier for drug companies to bring new products to market. The US House of Representatives has passed a bill known as the 21st Century Cures Act that would require the FDA to consider more flexible forms of clinical trials and incorporate patient experience into its review process. A similar bill is being considered in the Sentate. Critics say the bills risk weakening the FDA's ability to ensure drugs are safe and effective. Califf said it is possible to develop a clinical trial system that could be used to deliver better clinical trial results with larger, more representative patient populations, at lower cost, by using existing electronic health records. "We've got to overcome some interoperability problems," he said, "but we can do this." Speaking after the hearing at an event organized by the patient advocacy group Friends of Cancer Research, Califf said achieving a balance between fostering drug innovation and protecting patient safety is difficult. "You've got to have an internal compass and dedication to the mission," he said. -Reuters