SRINAGAR (KMS) – In Occupied Kashmir, people erupted in jubilation after Pakistan Prime Minister Imran Khan’s speech in the UN General Assembly where he forcefully and effectively highlighted the sufferings of the people of the territory due to continued lockdown and communication blackout. Despite heavy presence of Indian troops, people at many places came out of their homes and celebrated with firecrackers and dance after Pakistan Prime Minister Imran Khan’s speech at the UN General Assembly.

They raised high-pitched pro-Pakistan, pro-freedom and anti-India slogans. During his 50-minute historic address which continued to receive ovation, the prime minister said that India did terrorism in Balochistan. “Indian spy Kalbhushan Jadhav confessed to terrorism in Pakistan. India attacked Pakistan on the pretext of Pulwama,” he said. The prime minister said that the international community should help the Kashmiris get their right to self-determination before it is too late. “The United Nations should resolve the Kashmir issue.” 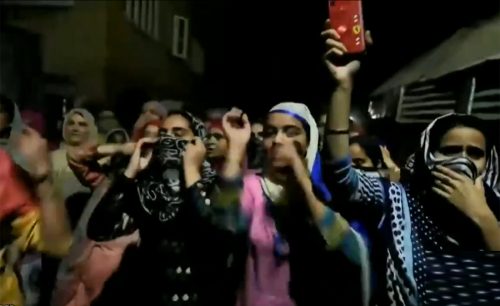 Imran Khan said that the curfew continuing for 54th day in Indian Occupied Jammu and Kashmir (IOJ&K) should be lifted immediately. “Pakistan will be blamed for whatever will happen after lifting of the curfew.” He said that anything could happen if a traditional war is started. “We believe in La Ilaha Illalah and I will fight,” he said. Imran Khan said that Modi had given a free hand to the Rashtriya Swayamsevak Sangh (RSS) for three days in Gujarat. “RSS, which was created after being impressed by Aldof Hitler, follows the ideology of the genocide of Muslims. Terrorists are trained in the camps of the RSS. Gandhi was murdered due to hate ideology of RSS,” he declared.