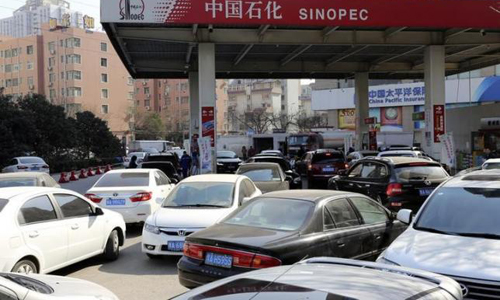 NEW YORK - Oil prices jumped more than 5 percent on Monday as traders reassessed how quickly Iran might increase exports after a preliminary nuclear deal and anticipated that a months-long rise in US crude inventories may be slowing. Brent crude's rally followed Thursday's nearly 4 percent tumble after Iran and six world powers announced a framework agreement on the OPEC member's nuclear program. But initial expectations of a quick recovery in oil exports were tempered by views that it could take longer than expected to roll back sanctions. "People betting on Iran's oil arriving tomorrow realize they may have to wait up to a year," said Phil Flynn, analyst at Price Futures Group in Chicago. Oil extended gains after industry intelligence group Genscape reported that stockpiles at Cushing, Oklahoma, barely rose last week, according to traders. It would be the smallest increase since November at the delivery point for the US crude contract traded on the New York Mercantile Exchange. Brent May crude LCOc1 rose $3.17, or 5.77 percent, to settle at $58.12 a barrel, its biggest one-day percentage rise since surging 7.8 percent on Feb. 13. US May crude CLc1 rose $3, or 6.11 percent, to settle at $52.14, the biggest percentage gain since gaining 7 percent on Feb. 3. A weaker dollar following Friday's disappointing US jobs report for March buoyed crude oil prices on Monday. US equities also rose on expectations the Federal Reserve will push any interest rate increases further into the year because Friday's jobs report showed employment grew less than expected. Also supportive to oil prices was news that top exporter Saudi Arabia raised prices for all the crude oil grades it will sell to Asia in May, boosting prices a second straight month. Concerns over conflict in Yemen supported prices, as fighting between a Saudi-backed coalition and Shi'ite Houthi forces continued. Iran's foreign minister said on Saturday that U.N. sanctions would be lifted immediately after a deal, but the United States released a fact sheet on Thursday saying that sanctions would be lifted as Tehran demonstrates compliance with any deal. "Both sides will describe the deal differently," said Olivier Jakob of Swiss-based consultancy Petromatrix. The United States made clear on Monday that it would only agree to sanctions being phased out gradually as Tehran complies with a final deal. - REUTERS