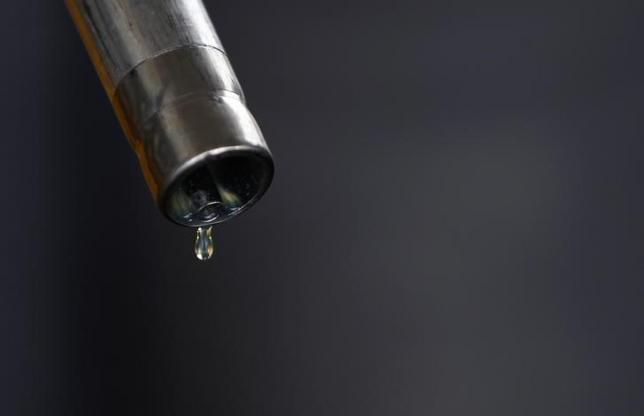 SINGAPORE - Oil prices dipped on Monday, weighed by global oversupply and slowing economic growth, although the prospects of falling production lent crude some support. US crude futures CLc1 were trading at $38.28 per barrel at 0615 GMT, down 22 cents from their last settlement. Morgan Stanley said on Monday that "hedging plus storage" was capping US crude prices, meaning that traders were selling futures to hedge forward production and storage which will pressure prices. They added that prices "will struggle to break $45 in the front, even if the USD continues to pullback." Brent futures LCOc1 were down 7 cents at $40.32 a barrel. While Morgan Stanley said that oil prices had likely bottomed out, it warned that a slowing economy and high production would prevent sharp rises. "Oil prices now seem to have bottomed, even though they are likely to stay subdued for the rest of this year before starting to move higher in 2017," the US bank said in a separate note, adding that cheap oil had not provided the economic boost to growth that many had hoped for. "When oil prices are falling below production costs, the income gains for consumers will be smaller than the costs to producers and falling oil prices become a negative-sum game," it said. For 2016, the bank said it was "no longer looking for an acceleration in 2016 GDP growth" and that the risk of a global recession was now 30 percent. Following a 70 percent price rout between mid-2014 and early 2016, oil markets are in flux. Many analysts expect a modest price recovery, while others see another slump. The International Energy Agency (IEA) on Friday said that oil prices had bottomed out due to US and other output cuts outside the Middle East-dominated Organization of Petroleum Exporting Countries (OPEC). The US oil drilling rig count fell for a 12th straight week last week to a total of 386, its lowest since December 2009 as drillers slash costs. Others, like Goldman Sachs, warn that global overproduction, which still sees over 1 million barrels per day (bpd) of crude produced in excess of demand, will pull prices back down again. So far, demand in core markets like China remains strong. China's January-February refinery throughput rose 4.6 percent compared to the same period a year earlier to 10.59 million bpd, official data showed on Saturday. This came shortly after China reported record imports of 8 million bpd in February. Supply, though, remains ample with Saudi Arabia's February oil production at 10.22 million bpd, industry sources said. Sentiment is leaning towards higher prices, with the amount of managed short positions open for US crude, which would profit from falling prices, down over 40 percent since mid-February 1067651MSHT, while open positions betting on price increases stand near record highs. -Reuters