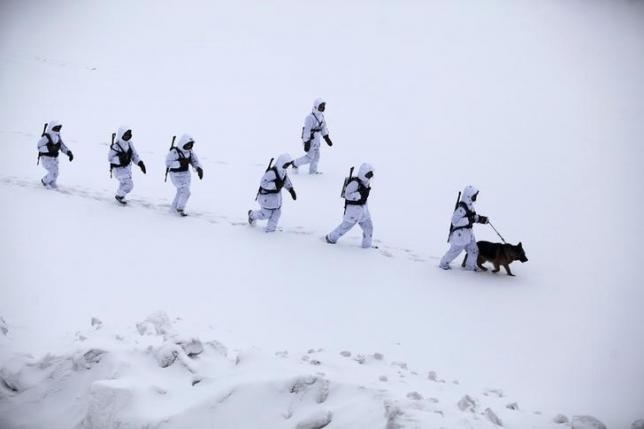 BEIJING - China's military warned on Saturday on its founding anniversary of growing risks along its borders, including in the disputed waters of the South and East China Seas. The Chinese military, the world's largest, has embarked upon an ambitious modernization programme in recent years. That, along with rising defence spending, has jangled nerves around the region. China says it is a threat to nobody, but needs to update outdated equipment and has to be able to defend what is now the world's second largest economy. In a front page editorial, the official People's Liberation Army Daily said the world was facing unprecedented changes. "The situation surrounding our country is generally stable, but the risks and challenges are extremely severe, and the possibility of chaos and war on our doorstep has increased," it said. "The maritime security environment is more complicated, and the undercurrents in the East and South China Seas have been gushing up," the paper wrote. China has become increasingly assertive in its dispute with Japan over a group of uninhabited islets in the East China Sea, while in the South China Sea it has been reclaiming land in waters where Vietnam, the Philippines, Taiwan, Malaysia and Brunei all have competing claims. China also looks warily at threats from extremists in countries like Afghanistan, the possibility of war on the Korean peninsula, instability on the border with Myanmar and India, and the festering question of the status of self-ruled Taiwan. "The mission of protecting national unity, territorial integrity and development interests is difficult and strenuous," the paper said. In a separate piece, the paper quoted Defence Minister Chang Wanquan as saying China was committed to being a force for peace, but would not compromise on core principles like Taiwan. "We will uphold the principle that people on both sides of the Taiwan Strait are one family and go down the path of peaceful development of relations (but will) resolutely oppose and hold back the plots of Taiwan independence separatists," Chang said. China claims Taiwan as its own and has never renounced the use of force to bring it under its control. Defeated Nationalist forces withdrew to the island after loosing a civil war with the Communists in 1949. China's military has also been dealing with a deep-rooted corruption problem, and this week announced another former senior officer, Guo Boxiong, would be prosecuted for graft. The party's official People's Daily said that these cases had "blacked the name" of the military, but that they were not representative of the loyalty and bravery of the broad mass of service personnel. -Reuters