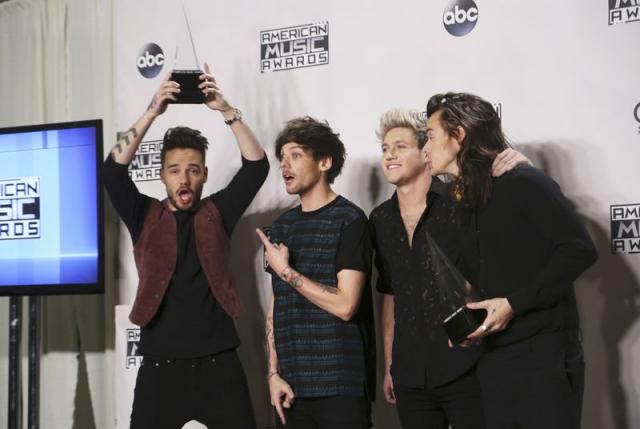 LOS ANGELES - British boy band One Direction swept the top honors at American Music Awards, while a sorrowful tribute to the victims of the attacks in Paris lent a somber note to a night of otherwise vibrant performances. One Direction was named artist of the year for a second consecutive year, and also won the best pop/rock album for a third consecutive year, with the album "Made In The A.M." "It's absolutely incredible to receive this award two years in a row. It's a testament to how incredible our fans are," band member Louis Tomlinson said. Actor-musician Jared Leto made a moving tribute to the 130 victims of the deadly Nov. 13 attacks across Paris, specifically the 89 who died at the Bataclan concert hall, where he said he and his band, 30 Seconds to Mars, had performed "a beautiful, peaceful" show earlier this year. "Tonight we honor victims of the unimaginable violence that took place in Paris and around the world," he said. "France matters, Russia matters, Syria matters, Mali matters, the Middle East matters, the United States matters, the entire world matters and peace is possible." French-Canadian singer Celine Dion sang Edith Piaf's classic French ode "La Vie en Rose" in memory of those lost. Key winners on the night included Taylor Swift, who went into the night with a leading six nominations and won three awards but did not attend the event. Nicki Minaj won two awards in the rap/hip hop categories, The Weeknd won two soul/R&B awards, Florida Georgia Line won two country music awards and country artist Sam Hunt was named best new artist. Unlike the irreverent antics of MTV's Video Music Awards and the industry prestige of the Grammy Awards, the fan-voted AMAs offer up the year's most popular music acts, with a spotlight on performances. "Star Wars" veteran Harrison Ford introduced five-piece a cappella group Pentatonix, who put their vocals to John Williams' iconic "Star Wars" score, along with a full orchestra on stage. The performance comes ahead of next month's highly-anticipated new "Star Wars: The Force Awakens" film. Show host Jennifer Lopez danced through a high-octane medley of this year's top pop songs, saying: "Tonight is about the music, and this year's music makes me want to dance." One of the biggest talking points came courtesy of Meghan Trainor and Charlie Puth, who took audiences by surprise with a steamy kiss after their duet "Marvin Gaye." Selena Gomez performed a sultry rendition of her latest hit "Same Old Love," country star Carrie Underwood belted her romantic ballad "Heartbeat" and Ariana Grande got the crowd dancing with her upbeat hit "Focus." Justin Bieber sang and danced through a medley of his hits, ending with a shower of rain on stage. The Weeknd set the stage on real fire for his performance of "The Hills," while Coldplay brought out dancing monkeys on a psychedelic stage for "Adventure of a Lifetime," and Walk The Moon started a dance party with their hit "Shut Up And Dance." -Reuters