As per reports, the members of anti-PTI alliance began gathering outside the ECP office after noon, where they are protesting against rigging of recently-held General Election 2018. The protest is being attended by leadership of all the allied parties which were divided into different groups.

In the protest of allied parties, the heads of the all parties are being not attended the protest till now. PML-N President Shehbaz Sharif and PPP Chairman Bilawal Bhutto, JUI-F chief Fazlur Rehman, JI chief Sirajul Haq, ANP chief Asfandyar Wali Khan and Mahmood Khan Achakzai were not present in the protest.

Speaking to the journalists, PPP leader Sherry Rehman said it was necessary to remain peaceful and demanded resignation from the ECP officials. “We will go to the parliament and unite political parties,” she vowed.

PML-N’s Raja Zafarul Haq claimed the election results did not reflect the voters’ choice. “We want to tell the world that the public rejects [these] elections. We are united on this matter,” he said, adding that the ECP was not allowed to fulfill its duty.

Meanwhile, the police and Rangers are deployed in the ECP office and Section 144 imposed in the federal capital. The Islamabad police has devised a security plan in view of the protest, under which only members of the Parliament were to be allowed to walk up to the ECP office.

Workers of political parties would not be allowed to enter into the Red Zone under the security plan. 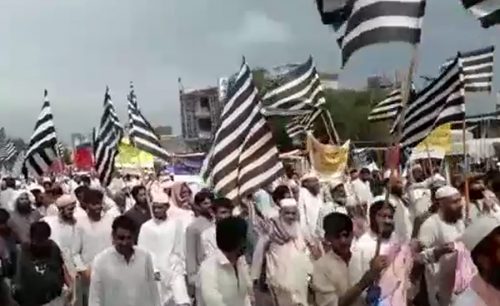 On the other hand, the JUI-F held protest in different cities of Pakistan against allegedly rigging in the recently happened election. These protest become the trouble for usual life of the citizens. The JUI-F workers staged protest, sit-in and blocking roads in Karachi, Peshawar, Noshehra, Haiderabad and other cities.

The traffic system of many big cities have been clogged due to the sit-in and protest of the JUI-F.