Over 1000 arrested as thousands protest against hanging of Mumtaz Qadri


ISLAMABAD (92 News) – More than 1000 people were apprehended as thousands took to the streets in Islamabad last night to protest against the hanging of Mumtaz Qadri, a former police commando accused of assassinating Punjab Governor Salman Taseer.

The army used teargas to control the situation as it grew increasingly tense, and the military was called in for reinforcements by evening as the agitating protesters tried to enter the parliament.

Protesters removed blockades on the way to the Parliament and also set some containers to fire before staging a sit-in outside the building, where fiery anti-government speeches are being delivered.

Troops were deployed on the streets of the capital after thousands of stone-throwing supporters of an Islamist assassin who was hanged last month clashed with police in chaotic scenes.

Thousands of supporters of the former police bodyguard gathered in Islamabad’s twin city Rawalpindi in the afternoon to offer prayers, before turning toward the heavily-barricaded capital, which was patrolled by hundreds of police and paramilitary soldiers. 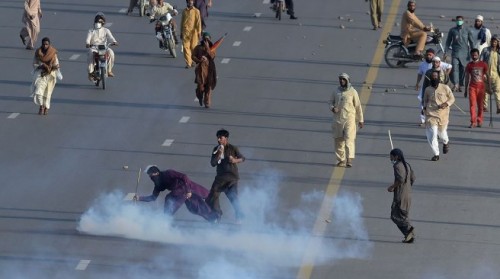