LONDON (92 News) – Overseas Pakistanis and Kashmiris living in the United Kingdom (UK) has raised voice against the Indian brutalities in Indian Occupied Kashmir and are being gathered in front of the official residence of the British Prime Minister Theresa May.

The European people are also participating in the protest on Kashmir Solidarity Day and protested against Indian forces’ atrocities in occupied Kashmir valley.

However, Kashmiris across the world are agitating against the atrocities of the Indian Army in the Indian Occupied Kahnsir and demanding their right of self determination. 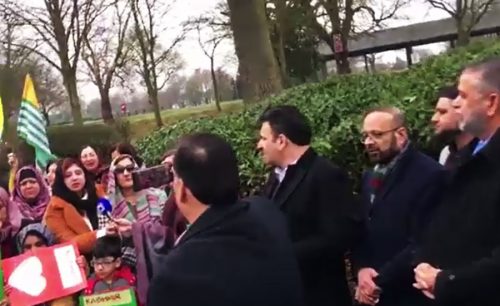 Kashmir Solidarity Day is being observed today (February 5) to express solidarity and wholehearted support of the Pakistani nation to the just struggle of Kashmiri people for their inalienable right of self-determination under the UN resolutions.

On this occasion, mass rallies, symposia, walks for peace, conventions and meetings will be taken out across Pakistan in order to draw world attention towards the plight of oppressed Kashmiri people. Human chains will be formed at Kohala, Mangla, Holar and Azad Pattan points linking Pakistan and Azad Kashmir.

In a tweet on the Kashmir Solidarity Day, he said that decades of atrocities by Indian occupation forces have failed to suppress ever strengthening legitimate freedom struggle. “Determined Kashmiris will succeed Insha Allah,” he said.

Hurriyat leader Yasin Malik and his wife Mashal Malik have thanked Pakistanis for expressing solidarity against atrocities being meted out to Kashmiris by Indian forces in Occupied Kashmir.

In a video message on Tuesday, Yasin Malik said that solution to all problems lies in dialogues. “The international community has adopted criminal silence over the Indian atrocities,” he said. “No nation can be subjugated by using the military force.”

Mashal Malik said that today every Pakistani is sharing the grief with their Kashmiri brothers. She said that sacrifices of Kashmiris will yield result. “We will definitely get independence Insha Allah,” she said.