KARACHI (92 News) – The Karachi Marriage Halls Association withdrew the call to close marriage halls across the city after a meeting with Sindh Minister for Local Bodies Saeed Ghani on Saturday.

During the meeting, Saeed Ghani assured the owners that no marriage hall will be demolished. He said that the SC order will be implemented in letter and spirit. “However, action will be taken as per law,” he said.

The minister said that the commercialized plots will be scrutinized minutely. “The owners of marriage halls will be given a deadline if action taken against them,” he announced.

The owners had announced closure of marriage hall across the city from Sunday.

Earlier, the marriage hall owners had gathered outside the Sindh Control Building Authority (SCBA) office and staged a sit-in. They also blocked University Road and chanted slogans against the authorities. Long queues of vehicles were witnessed on the roads adjacent to University Road. 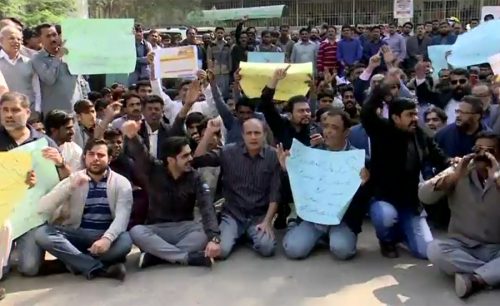 Karachi Marriage Halls Association president Rana Rasees said that permits were being cancelled even on declared commercial roads, which will destroy their business.

On Supreme Court orders, the Sindh Control Building Authority (SCBA) has issued notices to owners of 50 percent plots to stop commercial activities in East and Central District. The authorities have made arrangements to launch the operation from January 28.

On January 22, the Supreme Court had barred the use of residential houses for commercial purposes. “Wedding halls, shopping malls and plazas will not be constructed on residential plots,” SC’s Karachi Registry ordered.