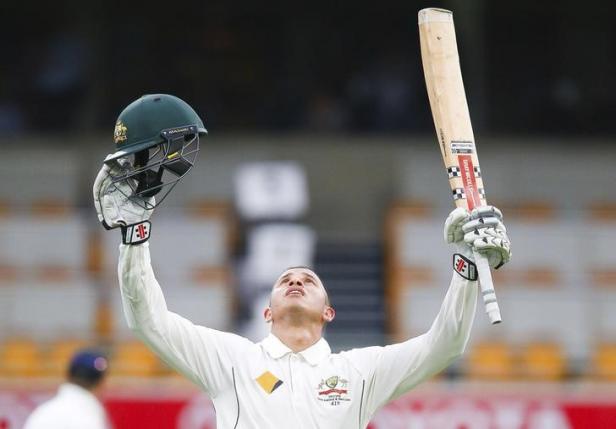 BRISBANE - Usman Khawaja's magnificent 174 helped Australia to a dominant 556 for four declared and an imposing lead of 399 at the end of the second day of the first Test against New Zealand on Friday. Australia's pace attack, with Mitchell Johnson to the fore, fired up with a lethal 20-minute spell in the final session to reduce the tourists to 157-5 at the close of play. Only Kane Williamson, who finished the day unbeaten on 55 alongside BJ Watling (14 not out), looked like offering any more than token resistance to the Australian onslaught. What already looked like a huge task to save the first of three Tests in the series for the tourists became even harder after paceman Tim Southee left the field with a back injury before lunch. While the potent strike partnership of Southee and Boult was behind much of New Zealand's confidence heading into the series, the hosts' pace attack showed on Friday why many in Australia were confident they would survive a string of retirements. The Mitchells, Johnson and Starc, took the new ball but it was Josh Hazlewood who made the breakthrough after tea when he had Martin Guptill caught by David Warner in the slips to break a solid 56-run opening partnership. Starc returned in the 31st over and had an immediate impact when opener Tom Latham sliced an attempted drive to Nathan Lyon at point and departed for 47. Starc hoped his senior fast bowling partner Johnson, 34, could continue leading Australia's attack for a few more years. "Hopefully he can keep going for a lot longer," Starc told reporters. "He's the leader of the attack... he's our enforcer. "It's great to watch and great to be in the same team as him. It's not great to face him in the nets. "He's bowling fantastically, bowling with great aggression, pace and bounce." COSTLY MISTAKES That triggered a New Zealand collapse from 102-1 to 118-5 in five overs, a fired up Johnson dismissing Ross Taylor (0) and skipper Brendon McCullum (6) with Starc completing the blitz by bowling all rounder James Neesham for three. "We made a good start with a couple of good partnerships, but they came hard for a 20-minute period and we made mistakes and if you make mistakes at this level quite often it's costly," New Zealand batting coach Craig McMillan said. New Zealand had upped their game in the morning after a chastening opening day but, after Boult had removed Australia skipper Steve Smith for 48 with a superb delivery, looked powerless to staunch the flow of runs. Khawaja, who secured his maiden Test century in Thursday's run-spree, reverted to slow-scoring type against more consistent New Zealand bowling in the opening session, adding just 31 to his overnight tally of 102. But he eased off the shackles when play resumed after lunch and stroked his 15th four to the third man boundary to reach his 150. The end to his 379-minute innings was something of an anti-climax with the lefthander mistiming a reverse sweep off Williamson as Guptill scooped up the catch at gully. Smith immediately called an end to the punishment leaving Adam Voges, playing his first Test on home soil at the age of 36, unbeaten on 83. –Reuters