BUCHAREST, Romania (92 News) – The Super Mushshak took off to skies of Bucharest in presence of a gathering of Romanian media and public for performing aerobatics at an air show on Friday.

The crowd was enthralled by the aerobatic performance, maneuverability and stability of this indigenously developed light aircraft.

A similar aerobatics performance was presented during practice for air show to rally in a huge crowd.

Pakistan Aeronautical Complex team is representing Pakistan for the first time in the history of Romanian Air Show amid heightened expectation of expected sales of the Super Mushshak Aircraft that is already being used by various countries in the world.

The Pakistan Air Force is flying its aircraft at Bucharest, attracting wide coverage of the international media with special presence of two lady pilots depicting the soft image of Pakistan in Eastern Europe.

Pakistan has recently signed an MoU with Romania for boosting the trade, culture and defence collaboration.

Romanian people have extended their overwhelming affection towards the Pakistan team.

The PAF contingent led by Chairman PAC Board Air Marshal Javaid Ahmed was given a befitting reception at Baneasa International Airport. 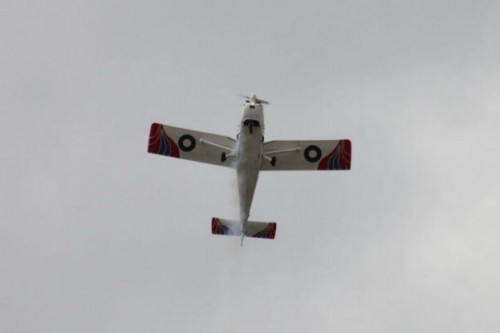