Deployment of PNS Shahjahan in North Arabian Sea is primarily focused on fulfilling international obligations for ensuring safety and security of these waters for international shipping. PNS Shahjahan is part of 25th Destroyer Squadron of Pakistan Navy Fleet and is capable to undertake variety of maritime operations in multi-threat environment.

The ship was given a warm welcome by the Royal Navy of Oman (RNO) upon its arrival. During stay at the port, the Commanding Officer PNS Shahjahan called on Base Commander Wudam Naval Base, Commodore Saif Bin Muhammad and conveyed sincere regards from Admiral Zafar Mahmood Abbasi, Chief of the Naval Staff to the Royal Navy of Oman and highlighted that the visit of PNS Shahjahan is a manifestation of the multifaceted long term collaboration that exists between the two navies. 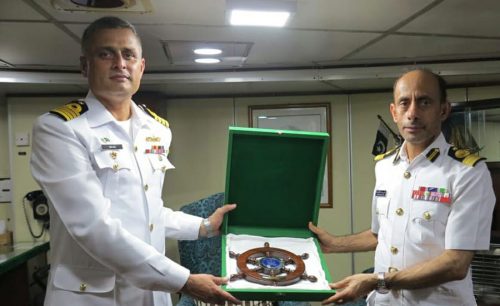 A reception, hosted by Ali Javed, Ambassador of Pakistan, was also held onboard PNS Shahjahan to celebrate the Renaissance Day (rebirth of Oman). Renaissance Day is celebrated in Oman to commemorate accession of Sultan Qaboos Bin Said to the throne on Jul 30, 1970.

Director General Ops and Plans, Commodore Doctor Khamees Bin Salim Al Jabri of RNO graced the occasion as chief guest. The reception was also attended by ambassadors and heads of missions from 15 different countries, officers & men from RNO and a large number of guests. Officers and men of PNS Shahjahan also remained engaged in various interactions with RNO during the port visit.

In the last part of the visit, PASSEX (Passage Exercise) was conducted between PNS Shahjahan and RNO Ship. Subsequently, the ship resumed its role in RMSP in the North Arabian Sea.

Pakistan and Oman are tied in eternal bonds of friendship and brotherhood. The visit by PNS Shahjahan to Oman Naval Base will further enhance Pakistan Navy’s bilateral relations with Royal Navy of Oman in diverse avenues.