ISLAMABAD (92 News) – President Dr Arif Alvi said on Thursday that it is a huge success for Pakistan that the UNSC held a session on the Kashmir issue after more than 50 years.

Arif Alvi said that it is his constitutional responsibility to review the parliament’s performance. He said that the primary purpose of the government is to make Pakistan a welfare state.

“It is a huge accomplishment for the government that the UNSC held a session on the issue after more than 50 years, despite India trying its best to prevent that from happening,” he elaborated.

Kashmir is not India’s internal matter

The president said that said that Kashmir dispute isn’t India’s internal matter. He said that the people and government of Pakistan strongly condemn Indian move to end special status of the occupied by abrogating Article 370 of the constitution, adding that Pakistan will always stand by the Kashmiri brothers.

Arif Alvi said that the Indian acts in IoK are danger for global peace. He said that India continues to violate ceasefire agreement, adding that India s aggressive actions threaten peace in South Asia. He said that the UN should send observers to the occupied valley to ascertain the seriousness of the situation.

India cannot suppress the voice of the Kashmiri Muslims

Arif Alvi said that the India cannot suppress the voice of the Kashmiri Muslims by using bad tactics, adding that the genocide of Kashmiris will not be tolerated. Kashmir dispute must be resolved in accordance with UN resolutions.

“India has always sponsored terrorism on Pakistani soil; Kulbhushan Jadhav is an example. He has confessed that he is a serving officer and was sent to ignite tensions in Balochistan.”

The president said the world will have to acknowledge that India is being ruled by a “fascist party” — the Bharatiya Janata Party.

The president further thanked the friendly countries for supporting the Kashmir issue.

“Thank the friendly countries that understood the seriousness of the Kashmir issue, especially China, and raised it in the UN,” he said. The president also lauded what he called a successful visit by the prime minister to the US.

“Pakistan is with its Kashmiri brethren. We will continue to extend moral support; we were, we are and will always be with the Kashmiris.

The opposition members started protest during the president’s speech. The president, referring to the protesting lawmakers, said that they can continue to protest but should also listen to him at the same time. 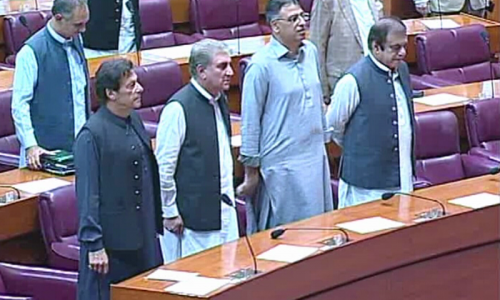 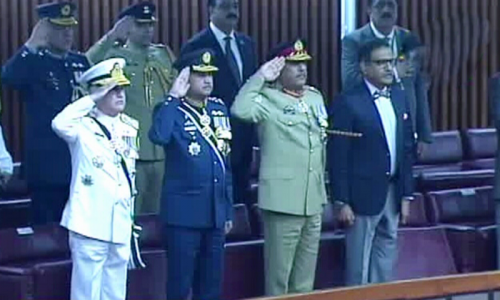 The chiefs of the navy and air force, and chairman of the Joint Chiefs of Staff Committee attended the session.

Meanwhile, the session of the National Assembly will commence on Friday at 10am.

President had summoned both the sessions in the exercise of powers conferred by clause (1) of Article 54 of the Constitution of the Islamic Republic of Pakistan.