KABUL – Pakistan and Afghanistan have agreed that peace and stability in the region would remain elusive until the menace of terrorism is rooted out, 92 News reported.

This was stated by Prime Minister Nawaz Sharif and Afghan President Ashraf Ghani during a joint press conference in Kabul on Tuesday.

The prime minister expressed confidence that Pakistan and Afghanistan will succeed in rooting out terrorism through their firm determination and by adopting a comprehensive and coordinated strategy.

Nawaz said Pakistan has the highest stake in a peaceful and stable Afghanistan. “We stand in strong solidarity with Afghanistan.”

He said during talks with Afghan leadership they recognized that an enduring peace in Afghanistan will be a distant dream without an inclusive intra-Afghan reconciliation.

He reaffirmed Pakistan’s full support for an Afghan-owned and Afghan-led peace and reconciliation process, assuring the Afghan president of making all possible efforts in this regard.

He said that continuation of such offensive and attacks will be construed as terrorist acts. “We condemn such attacks in strongest terms.”

Prime Minister Nawaz Sharif said all sanctuaries, when found, would be eliminated by direct action, and would be monitored by the existing mechanism. 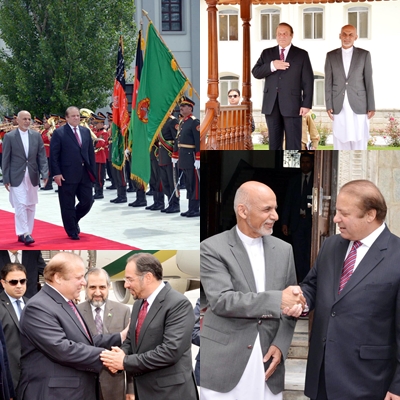 They discussed different aspects of bilateral relations and regional situation. Delegation level talks were also held between Pakistan and Afghanistan at the Presidential Palace in Kabul.

Meanwhile, the prime minister has now returned to Islamabad after completing his day-long visit of Kabul.