ISLAMABAD (92 News) – Chinese President Xi Jinping has said that it is their responsibility to shift more strengthened Pak-China relations to the next generations.

In his historic address to the parliament’s joint session on Tuesday, he said that economic progress in Asia is the objective of Pakistan and China.

“It is a great honour to address the joint session of the parliament.”

He said that Pakistan is his second home. “Pak-China friendship is an asset for the next generations. We have to deal with security challenges jointly.”

The Chinese president said that Pakistan is the front line state in the war against terror. “China considers Pakistan a good neighbor and good brother,” he said.

He said that Dr Allama Iqbal had talked about the progress of China in 1930.

He said that they would continue to support sovereignty and solidarity of Pakistan. “Pakistani culture is unmatched. It was Pakistan that first of all established diplomatic relations after accepting China.” 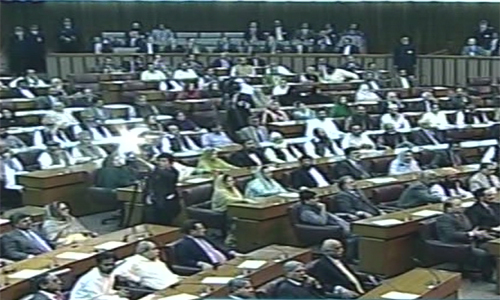 The Chinese president said that thousands of Chinese engineers are working in Pakistan.

“The economic corridor project is unique. It will not only benefit China and Pakistan but also the entire South Asia,” he maintained.

“This project will bring South Asia and Gulf states closer to each other.”

He said that they would fully support Pakistan in achieving economic targets.

“We will fully protect bilateral economic progress and cooperation,” he added.

The Chinese president said that they will jointly remove every hurdle in progress.