The army chief while presiding a two days long 78th Formation Commanders’ Conference which was held at GHQ. The conference was attended by corps commanders, principal staff officers and all formation commanders of Pakistan Army.

According to the Inter-Service Public Relation (ISPR), the participants were briefed on prevalent geo-strategic environment, challenges to national security and own strategy in response to evolving threat. The participants also held detailed discussion on a host of professional matters.

The forum was also briefed on the cutting edge technologies being harnessed to modernise Army’s outfits besides up-gradation of logistics infrastructure corresponding to emerging operational imperatives. 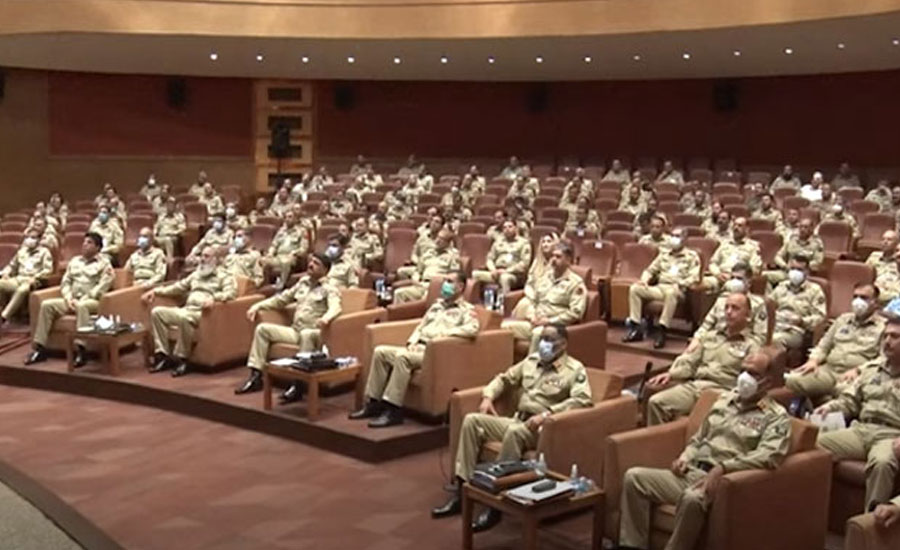 On the occasion, the army chief expressed satisfaction over progress of the stabilization operations across Pakistan following the successes of Operation Radd-ul-Fasaad. The forum paid rich tribute to the resilient nation particularly the people of tribal areas for their supreme sacrifices in the war against terrorism.

The forum also reviewed progress on transition and uplift of the Newly Merged Districts of Khyber Pakhtunkhwa and socio-economic development in Balochistan as a dividend of hard-earned peace and stability.

Reviewing the prevailing situation on Eastern Border and latest developments in IIOJ&K, forum expressed complete solidarity with Kashmiri people in their just struggle for the inalienable right to self-determination as enshrined in UNSC Resolutions.

The forum was also apprised on Pakistan’s meaningful support to Afghan Peace Process and stringent measures being taken for enhancing border security.

The army chief lauded high standard of training displayed by formations during various exercises besides excellent performance of officers and troops participating in international training events and competitions. He commended the formations for their constant focus on training and high state of morale which augments their operational readiness.

COAS also awarded trophies to Mangla and Multan Corps for their overall best performance in Sports and Training respectively.

ISLAMABAD (92 News) – Prime Minister Imran Khan has emphasized the need for strengthening of Pak-Saudi economic relationship and taking steps for realizing the vast possibilities in the fields of trade, investment and energy.

ISLAMABAD (92 News) - Minister for Information Fawad Chaudhary has rejected the impression of any stalemate between government and the opposition on the appointment of members of Election Commission of Pakistan (ECP).