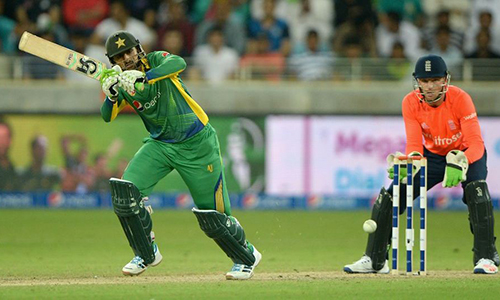 SHARJAH (92 News) – England captain Eoin Morgan hit the winning run as the tourists secured their first T20 whitewash with a thrilling super-over win against Pakistan in the third match of the series in Sharjah on Monday.

Pakistan were limited to three for one in their super over by the yorkers sent down by Chris Jordan and England reached their goal with a ball to spare after a 154-run tie.

"Handing Chris Jordan the ball in that super over epitomised the quality of our squad," Morgan was quoted as saying by the BBC.

"We've watched him a lot in the nets and he's our best yorker bowler so once we decided on that plan it was an easy decision to go to him.

"Chris Woakes has a different set of skills but once we chose to go for six yorkers, it had to be Jords."

Pakistan had looked set to avoid the whitewash but England managed to get the prized wicket of Shoaib Malik, who fell to a Sam Billings catch from Woakes' bowling for 75 in the 20th over, which stalled their progress.

The hosts scored 154 for seven to tie the score England had reached for the loss of eight wickets, with James Vince top-scoring on 46.

"Credit to England, they did well. We played well and batted well but missed an opportunity again," said Pakistan captain Shahid Afridi.

England's win completed a fine limited-overs tour with a 2-0 Test series defeat folloeed by a 3-1 win in the one-dayers.

The victory was England's sixth consecutive Twenty20 success heading into the World T20 in India in March.