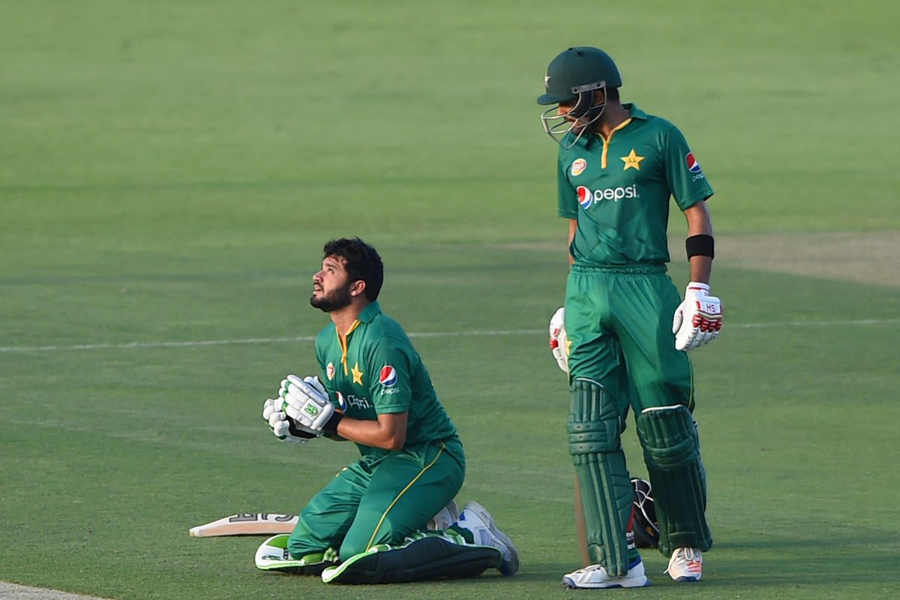 October 6, 2016
ABU DHABI (92 News) – If Azhar Ali (101 off 109 balls) managed to make a statement with a resolute hundred, Babar Azam's hundred (117 off 106 balls) -- his third one on the trot -- spoke volumes about the 21-year-old's hunger for runs. The two combined to take Pakistan to a 3-0 sweep in the One-Day International series, resigning West Indies to a 136-run defeat in the third game on Wednesday.

Azam and Azhar's steady knocks guided Pakistan to 308 for 6 after the latter won the toss and decided to bat on the Sheikh Zayed Stadium pitch. Though a few wickets toward the end meant Pakistan didn't push on to a larger total than it achieved in the second ODI, it was still enough of a challenge for West Indies.

The visiting side was circumspect at the start, hoping to keep wickets in hand, but Sohail Khan took out Evin Lewis's leg stump when the opener had only made 22. Kraigg Brathwaite and Darren Bravo tried to steady the innings but by then, the runs had slowed down to barely a trickle. Bravo, in particular, had a tough time, batting at 4 off 26 balls at one stage.

But just as Bravo seemed to have broken the shackles with a six, Brathwaite was out lbw to Shoaib Malik for 32 off 44 balls. Wahab Riaz then ran in and struck in consecutive overs, nabbing Bravo (17) with the shorter ball. Marlon Samuels (13) avoided getting out to Wahab Riaz for the third time in the series, but the wicket did come in his over. Samuels, the non-striker, was more than half way down the pitch when Dinesh Ramdin turned down the single and Mohammad Rizwan ran towards the stumps to run the former out for 13.

Ramdin (37) hung around to add 24 runs with Kieron Pollard and 42 runs with Jason Holder, but the required run rate continued to rise and it wasn't long before the side was all out for 172 in 44 overs. Mohammad Nawaz grabbed 3 for 40, including the wicket of Pollard, to finish as the highest wicket-taker of the series with seven wickets total.

Azam's tally of 360 runs is also the highest number of runs scored in a three-match ODI series, beating de Kock’s total of 342. Azam was finally bowled by Pollard in the 46th over after hitting eight boundaries and a six in another dominating exhibition of batting.

Azhar, who was unsuccessful in the first two games with a first-ball duck and nine, managed to lead from the front in the third and final game. He and Sharjeel Khan (38) put Pakistan on track for a big total with a solid 85-run start in 14.1 overs as West Indies' new-ball attack struggled.

Sulieman Benn, the left-arm spinner, provided West Indies with the first breakthrough, in his second over, when Sharjeel holed out at long-on after hitting five boundaries off 41 balls.

Azhar and Azam added 147 for the second wicket to frustrate West Indies before Azhar was bowled by Holder in the 39th over. Sarfraz Ahmed made 24 not out as Pakistan managed 96 runs in the last 15 overs. 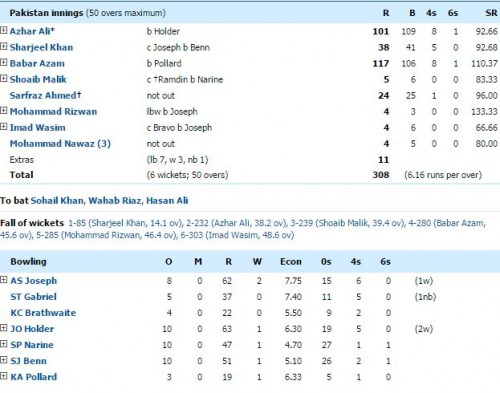 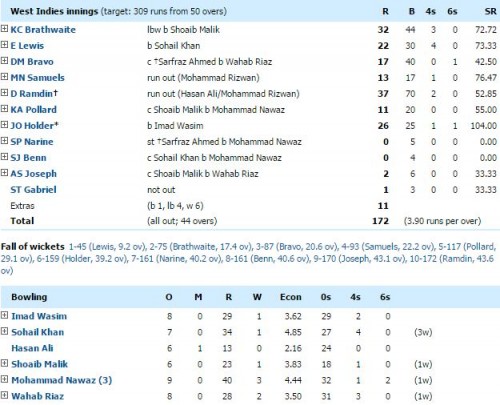