Pakistan close in on victory against Bangladesh in final Test


DHAKA – Pakistan set Bangladesh an improbable victory target of 550 runs and claimed the wicket of opener Imrul Kayes to inch closer to a series-clinching win in the second and final Test on Friday.

The visitors, who have failed to win a single match on their tour, skittled out the hosts for 203 in the first innings on the third morning but refused to enforce follow-on.

Pakistan decided to bat instead and declared their second innings on 195 for six for an overall lead of 549 runs.

In reply, Bangladesh reached 63 for one in their second innings at stumps, still 487 runs behind the target with Tamim Iqbal (32) and Mominul Haque (15) at the crease.

Left-handed Shakib, who hit 14 boundaries and two sixes, ran out of partners in the end with injured paceman Shahadat Hossain absent hurt.

Bangladesh managed to take three quick wickets in Pakistan’s second innings, with paceman Mohammad Shahid taking out the openers in his first spell.

Captain Misbah-ul-Haq blasted 82 off 72 balls to help his team accumulate quick runs and added 58 for the fourth wicket with Younus Khan (39).

Pakistan declared after Misbah holed out in the deep off part-time spinner Mahmudullah.

Bangladesh needed Tamim and Imrul to replicate their 312-run second innings opening stand that helped the hosts draw the last Test at Khulna but that was not to be.

Yasir bowled left-hander Imrul (16) to break the 48-run opening stand with a delivery that turned in sharply to hit the stumps. 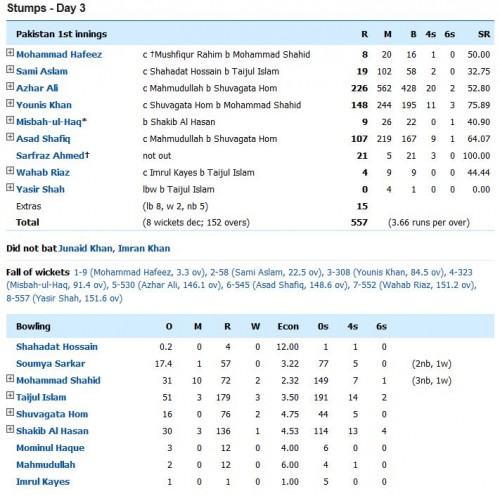 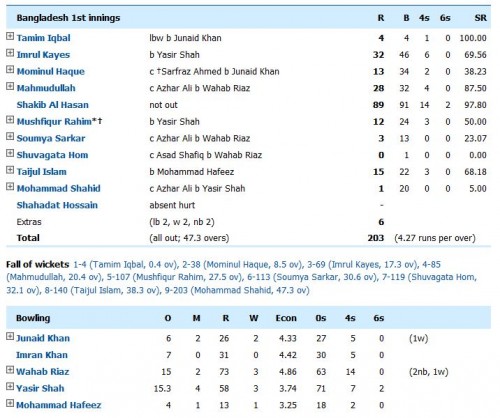 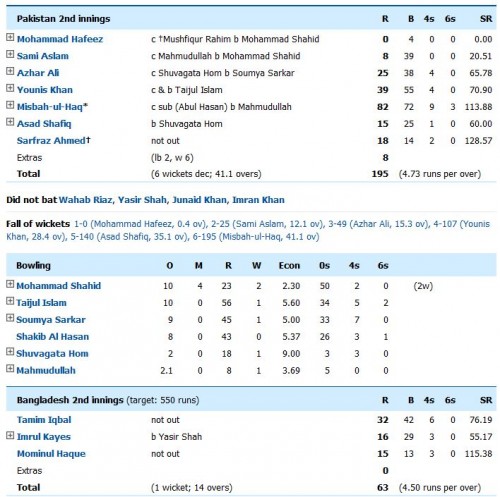