Pakistan drills as face off against defending champions loom


TAUNTON (Webdesk/AFP) – With the ICC World Cup in full swing, the Men in Green drilled throughout the day during a practice session at County Ground Taunton.

Pakistani bowlers were seen in action at the bowling nets, whereas batsmen hone their skills as the team prepared to take on Australia in their fourth match of the tournament.

At the points table, Pakistan sits in the middle with three points after three games, whereas, Australia has four points under its kitty.

Pakistan will face the title-holders at Taunton on Wednesday. The Men in Green have won just one of the last 14 one-day internationals against Australia.

Pakistan have no need to fear Australia: Hafeez 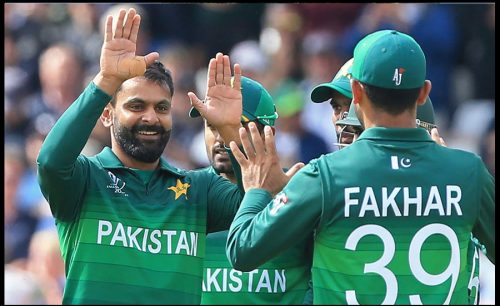 Veteran batsman Mohammad Hafeez has urged his side to take the confidence from their win over hosts England into their next World Cup match against champions Australia.

The 38-year-old was Pakistan´s saviour in their sensational 14-run win over England in Nottingham, riding his luck on the way to a match-turning 84 off 62 balls.

That helped Pakistan post a challenging total of 348-8 and set up a confidence-boosting win after they flopped badly in their opening seven-wicket defeat by the West Indies.

“I think all 10 teams are beatable,” Hafeez told AFP on Sunday. “If you look at England they were playing top cricket and people were thinking it would be hard to beat them.”

Hafeez, speaking before Australia suffered a 36-run loss to India at the Oval on Sunday, added: “But all teams are beatable … if you talk of our next opponent (Australia) they are also playing very good cricket but they too can be defeated.”

Pakistan, who face the title-holders at Taunton on Wednesday, have a dismal recent record against Australia — they´ve won just one of the last 14 one-day internationals between the teams dating back to October 2014.

Australia — who have won four of the last five World Cups — completed a 5-0 whitewash of Pakistan in the United Arab Emirates in March, albeit Pakistan rested seven of their top players.

“Yes, we don´t have a very good record against Australia because they play tough cricket but every day is a new day,” said Hafeez.

“This is a World Cup and we now have momentum after our win over England.”

Pakistan were left to rue persistent rain in Bristol on Friday, which led to a no-result washout in their match against Sri Lanka with both teams receiving a point.

“Yes, that was frustrating but you cannot do much about the weather and now we have moved on. But I am sure when we play again we will put up the same game that we played against England,” Hafeez promised.

Hafeez said Pakistan´s remarkable turnaround in their first two games — they were bowled out for a paltry 105 by the West Indies in Nottingham — was down to acknowledging their mistakes.

“I think we realised that we played a very bad game and we gave confidence to each other and convinced each other that we can win and that positive thinking helped bringing the change,” said Hafeez, a veteran of 212 ODIs.

Their win over England, who defeated them 4-0 shortly before the start of the World Cup, ended Pakistan´s sequence of 11 consecutive defeats since losing the fifth and final one-dayer against South Africa in January.

“Yes, we had been losing but we were playing good cricket,” Hafeez explained. “The best thing about the England win was that everyone contributed.

“Even Hasan Ali, who didn´t get a wicket, but his last three overs were good and brought us back,” said Hafeez of the medium-pacer who finished with 0-66 in 10 overs.

“When you play like that you get confidence and momentum.”