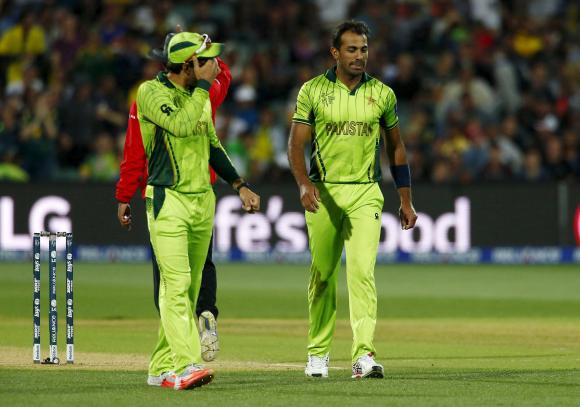 ADELAIDE – Australia's World Cup quarter-final against Pakistan threatened to produce more yawns than thrills at Adelaide Oval on Friday, but paceman Wahab Riaz sparked life into the match with two wickets and an enthralling duel with Shane Watson. Though Australia ultimately mowed down Pakistan's modest 213 to win by six wickets, the belligerent left-armer's masterclass of short-pitched bowling rattled Australia's top order and fired up an impatient crowd. Removing opener David Warner for 24 in his first over and Australia captain Michael Clarke for eight in his next, 29-year-old Wahab then engaged in a fiery battle with Watson, sending bouncers pinging off the burly Queenslander's chest and whistling past his nose. He followed up the better ones with a stroll up the pitch to meet the all-rounder, throwing him a withering stare and clapping his hands provocatively. Watson was at first impassive as a brick wall amid the assault, staring down Wahab in cold silence after each delivery which seconds before had him hopping about like a frightened rabbit. The strain finally showed and at 83-3, Wahab thought he had his man when Watson, on four, hooked straight to third man. The simplest of catches was dropped by Rahat Ali and Wahab roared in frustration. The paceman came again, however, targeting hard-hitting Glenn Maxwell, and was again let down in the field, with Sohail Khan spilling another gettable chance when running in from third man to meet a skied top edge. With Australia 154-4, that was to prove the last-chance saloon. Watson (64 not out) and Maxwell (44) would carry the co-hosts home with an unbeaten partnership of 68. Wahab finished the tournament the best of Pakistan's bowlers with 16 wickets at an average of 23, earning high praise from captain Clarke who was caught trying to fend off a venomous ball that reared into his throat. Retiring Pakistan captain Misbah-ul-Haq paid tribute to Wahab, who has often struggled for consistency in a seven-year career but shone in the spotlight of the game's biggest stage. "Nobody in this world is such good against a bowler who is bowling 150 (kmph) and with this sort of deceptive pace and bounce," said Misbah. "He really bowled well throughout the World Cup. He was totally a different bowler, and today he's shown his class again. At one stage we were pretty much in the game, and the way he was bowling, that catch could have made a big difference, but this the way normally cricket is," he said. "That's as good as I've faced in one-day cricket for a long time... Probably gave us a good look at what it would have been like to face Mitchell Johnson throughout the Ashes," Clarke told reporters, referring to his own left-arm fast man. –Reuters