LAHORE (92 News) – Pakistan and India have reached a consensus over 80 per cent of the agreement for Kartarpur Corridor in today’s meeting, said Director General for South Asia and South Asian Association for Regional Cooperation and Foreign Office Spokesperson Dr Mohammad Faisal.

Pakistan and India had initiated the second round of talks at the Wagah Border to discuss and finalize plan for the Kartarpur corridor.

Dr Mohammad Faisal, who led the Pakistani delegation in talks, told reporters after meeting that the next round of talks between two sides would sort out the remaining 20 per cent of the pact as considerable progress had been made in second round of mutual talks.

He said the basic objective of plan was to establish peace corridor, adding Pakistani side had planted a sapling of peace and further efforts were continuing to establish peaceful relations between the two states.

He said they asked Indian delegation to plant sapling of peace, but they left.

To a question, the spokesman said he couldn’t share the details of the agreement until final nod.

Both the sides were to discuss the draft agreement for finalising the modalities of the Kartarpur Corridor which included construction of roads, bridges and other facilities.

Both sides discussed final date of inauguration of Kartarpur Corridor, number of pilgrims, documentation and other matters.

The delegates from Pakistani side included representatives from the ministries of foreign, interior, religious affairs, law and other departments.

The two sides were initially scheduled to meet on April 2, however, the meeting was postponed.

Talking to reporters before meeting, Dr Faisal said Pakistan is ready to open the corridor on the occasion of birthday anniversary of Baba Guru Nanak.

He further said 70 percent work on the corridor had been completed. 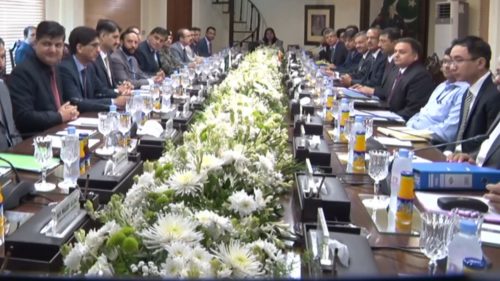 The FO spokesman said: “Prime Minister Imran Khan wants peace in the region and we are moving forward with positive approach.”

During the first meeting between the two border-sharing states on March 14, New Delhi had decided not to grant visas to Pakistani journalists to cover the event.

On March 19, Pakistan and India held a technical meeting at the designated zero point to discuss the plan for the Kartarpur corridor project.

During the meeting, the technical experts indicated areas related to the corridor. Both sides set up border fencing around the Kartarpur corridor.