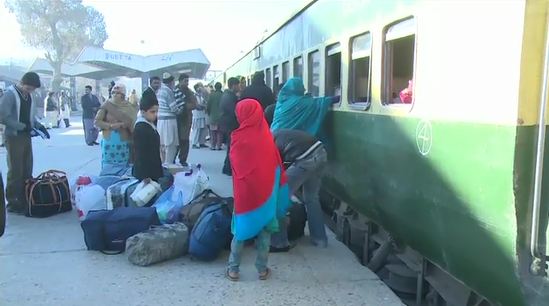 LAHORE (92 News) – Following the successful dialogues, Pakistan Railways Sampars Union has on Friday ended its protest and resumed the train services across the country after suspending it over the arrest of union members.

Pakistan Railways Sampars Union was demanding increase in salaries and staff for long time and it had suspended the train services across the country on November 9 but later resumed the service on the assurance of Railway authorities.

After resuming the service, Railway Police had arrested the central leader of Station Master Union Raja Irfan in Quetta. The Sampars Union protested against the arrest by halting the trains throughout the country.

Bilawal Bhutto announces to bring a no-confidence motion against PM

RAWALPINDI (92 News) – Responding to the reservations of PML-N on appointment of Justice (rtd) Sheikh Azmat, Minister for Science Fawad Chaudhry has taunted that the opposition does not see any other judge except Iftikhar Chaudhry and Malik Qayyum

Pakistan being pushed towards anarchy by some internal helpers: Shahbaz Gill

ISLAMABAD (92 News) – Prime Minister’s Special Assistant on Political Communication Dr Shahbaz Gill said recent revelations about India indicate that a vicious attempt is being made by some internal helpers to push Pakistan towards anarchy.

ISLAMABAD (92 News) – The enemy of peace India is a cause of regional chaos and a threat to global stability as another great double game of Indian government to destroy the regional peace with its links with Daesh has been exposed.

ISLAMABAD (92 News) - The Supreme Court (SC) has rejected the bail petition filed by PML-N leader Hamza Shehbaz in money laundering case after he decided to withdraw it on Friday.