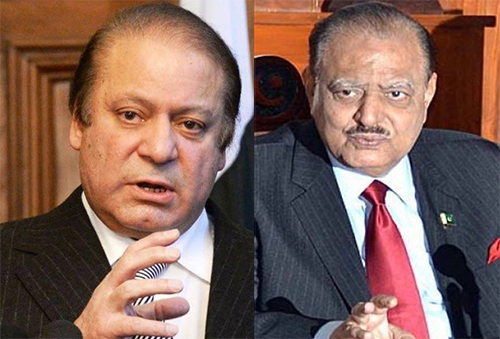 ISLAMABAD (92 News) – Pakistan has on Saturday strongly condemned terrorist attacks in France. President Mamnoon Hussain and Prime Minister Nawaz Sharif have strongly condemned deadly terrorist attacks in Paris. In his condolence message, President Mamnoon Hussain expressing solidarity with the French people said that terrorists are enemies of humanity. “Terrorism is an international phenomenon and a joint strategy should be thrashed out for its complete eradication,” he said. In his condolence message, Prime Minister Nawaz Sharif said Pakistan stands firm behind the people and Government of France in this hour. “Pakistan is ready to cooperate with French government to eliminate menace of terrorism,” he said. The foreign office spokesperson in a statement in Islamabad expressed heartfelt sympathies with the bereaved families. “Pakistan condemns terrorism in all its forms,” he said.